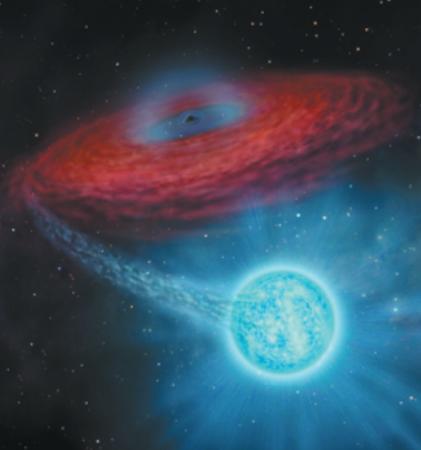 An artist's illustration of the black hole named LB-1. (PHOTO/XINHUA)

An international team of scientists led by China has discovered a king-size, stellar-mass black hole in Earth's "cosmic backyard" containing the mass of 70 suns. It is the biggest known of its kind and roughly three times bigger than what scientists previously thought was possible, researchers said on Thursday.

The discovery challenged astronomers' understanding of the formation models for black holes of its class, and provided a new way to find similar black holes in the Milky Way galaxy that may lead to new theories for black hole astrophysics and stellar evolution.

The black hole, named LB-1, was found slowly devouring gas from a nearby star more than 13,800 light-years from Earth, relatively nearby, considering the estimated 105,700 light-year diameter of Earth's galaxy.

"It is like a 'little emperor' of a black hole in our cosmic backyard," said Liu Jifeng, deputy director of the National Astronomical Observatory of China and lead researcher for the discovery.

Scientists believed that stellar-mass black holes were created when massive stars died and collapsed, but current theoretical calculations show that no matter how big the star initially was, the mass of the final black hole cannot exceed 25 solar masses if the star is rich in metals like the newly discovered one.

"When a giant star born in our galaxy approaches the end of its life, it must shed most of its gas in powerful stellar winds," Liu said. "Therefore, it should not leave such a massive remnant like LB-1. It is an extraordinary find and we may have to revamp our models to explain its formation."

One hypothesis is that LB-1 was created when two smaller black holes merged, he said. The merging of black holes is one of the most energetic events in the universe, capable of creating ripples in space-time known as gravitational waves, which were first detected in 2015.

"This discovery forces us to reexamine our models of how stellar-mass black holes form," said David Reitze, executive director of the Laser Interferometer Gravitational-Wave Observatory Laboratory.

"This remarkable result, along with the … detections of binary black hole collisions during the past four years, really points toward a renaissance in our understanding of black hole astrophysics," he said in a scientific review.

An international team of 55 scientists from 28 research institutions in seven nations, including China, the United States and Spain, have worked together in the past three years to confirm the discovery. The findings were published on Thursday by the journal Nature.

There should be over 100 million stellar-mass black holes in the Milky Way, yet scientists have only discovered around 20 such entities, all below 20 times solar mass, in the galaxy due to their relatively small size and ability to absorb all light, said Liu.

"We typically look for stellar-mass black holes by looking at the X-ray signals emitted when their immense gravity is gobbling up gas from a nearby star," he said. "But this method will inevitably leave out most black holes because not all of them are engaged in a cosmic banquet and thus do not emit X-rays."

To overcome this obstacle, scientists used the powerful spectrum surveying capability of LAMOST, the Hebei telescope, to find stars that are seemingly orbiting an invisible object. Though this technique was first proposed in the 18th century, it is an extremely time-consuming process that has only become feasible with recent improvements in telescopes and detectors.

Cui Xiangqun, the chief engineer for LAMOST's operation and development, said the discovery of LB-1 has proved the feasibility and efficiency of using LAMOST to carry out such techniques. China has launched a "black-hole hunter" initiative to search out nearly 100 stellar-mass black holes in the Milky Way galaxy in the next five years.

Roberto Soria, a professor of astrophysics at the University of the Chinese Academy of Sciences, said global cooperation plays a key part in the latest discovery.

"The universe is so big that no astronomy research can be done quickly with one telescope alone," he said.