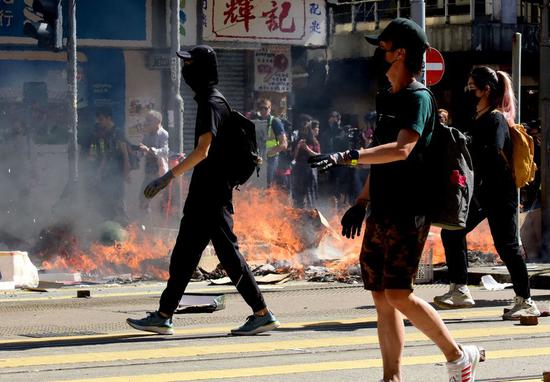 The so-called Hong Kong Human Rights and Democracy Act of 2019 and another related act have become U.S. law, which was strongly condemned and opposed in Hong Kong.

Leung Chun-ying, vice chairman of the National Committee of the Chinese People's Political Consultative Conference (CPPCC), said Thursday that he does not believe U.S. congressmen who voted for the acts fully understand the situation in Hong Kong and the passage of the acts is not in the interests of Hong Kong.

The Democratic Alliance for the Betterment and Progress of Hong Kong (DAB) said in a statement that the acts disregarded the fact, interfered in China's internal affairs, and violated international law and basic norms governing international relations.

The DAB said the action of the United States to cooperate with rioters in Hong Kong will eventually harm its own interests.

Hong Kong Federation of Trade Unions said the United States added fuel to the flames by signing the acts into law.

The human rights and freedom are fully protected in Hong Kong, and it is those black-clad rioters who are destroying Hong Kong and trampling on the "one country, two systems" principle, the federation said.

But U.S. politicians chose to ignore the fact as their aim is to jeopardize the stability and prosperity in Hong Kong and contain the development of China, the federation said.

Tam Yiu-chung, a member of the Standing Committee of China's National People's Congress, criticized the United States who used Hong Kong to contain China's development and said China can adopt countermeasures but frictions are in the interests of neither side.

Henry Tang, a member of the Standing Committee of the CPPCC National Committee, slammed the blatant interference in China's internal affairs of the United States and the double standards in its Hong Kong policy.

The acts are unnecessary and unwarranted as the autonomy and human rights are fully guaranteed in Hong Kong, Ip said, adding that the democracy in Hong Kong also improved from 1997.

Lo Wai-kwok, chairman of the Business and Professionals Alliance for Hong Kong, said commercial circles in Hong Kong were worried that the acts may harm the cooperation between Hong Kong and the United States. He hopes the United States would cherish the sound relations with Hong Kong.

Liao Cheung-kong, the convenor of the pro-establishment camp in the Legislative Council of the Hong Kong Special Administrative Region, said the acts will not only be helpless in resolving the unrest in Hong Kong but frustrate the efforts of Hong Kong community to restore peace.

Sze Wing-wai, a permanent honorary president of the Chinese Manufacturers' Association of Hong Kong, said Hong Kong is just a pawn in a chess game in which the United States is using its laws to gain more leverage in trade frictions with China.