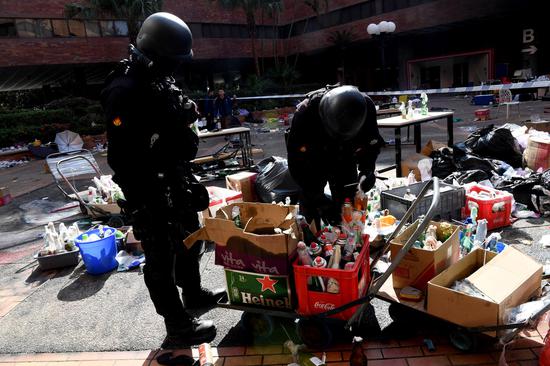 On a square inside the Hong Kong Polytechnic University (PolyU), a firefighter found a brown glass bottle, in which the content seemed suspicious. Together with three others he labeled the bottle as "dangerous" and cordoned off the area.

From Nov. 17, rioters gathering around PolyU have taken the campus as a stronghold to launch assaults on police officers, using lethal weapons including petrol bombs, bows and arrows, metal balls and bricks.

Police announced on Monday that around 1,100 people have left the campus in a peaceful and orderly manner, including 300 underage people. At present a handful of rioters were believed to remain on campus.

Chow Yat-ming, assistant commissioner of police, said that police have two tasks: handling dangerous items that posed threat to public safety, and gathering evidence related to the damage of the campus.

"The campus has been filled with dangerous items such as corrosives and petrol bombs," he said.

Wong Chun-yip, deputy chief fire officer told press that they would help evaluate the situation inside the campus. "If there is any dangerous chemical causing imminent danger, or if there is any chemical leakage, we will take immediate action to mitigate the risk," he said.

Xinhua reporters walked into the campus with police, where a library not far from the entrance was seriously vandalized. The turnstile was damaged while books were scattered on the ground.

On the street there were plastic and glass bottles as well as cans. An unnamed police officer said many of them contained chemicals that could make petrol bombs.

The door of a laboratory has been forced open. In fact, many labs were vandalized like that one. Local residents are worried that the stolen chemicals could be dangerous to public safety.

In a Starbucks cafe inside the campus, tables and chairs were missing. Cabinets and counter machines were destroyed. Rubbish was dumped in the kitchen, where the air was teeming with stinky odor and flies were buzzing in crowds. "I have never seen a cafe destroyed so badly like this," said a police media liaison officer.

Police searched university buildings where lifts were damaged. "If we find anyone we will provide necessary medical treatment, before making possible arrest," a police officer said.

As of 2 p.m. Thursday, police have seized more than 600 petrol bombs, dozens of arrows and several long bows, as well as a lot of flammable items.

Senior superintendent Li Kwai-wah of organized crime and triad bureau said that the situation of the campus was more complicated than estimated, but police would try to complete their work as quickly as possible.