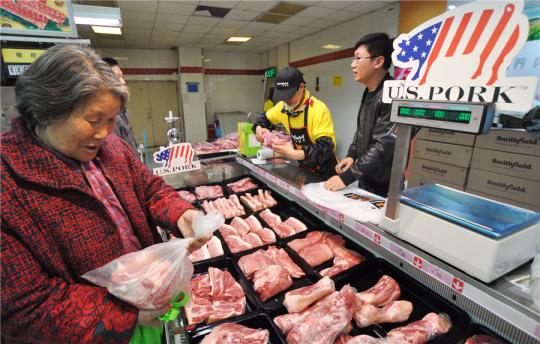 Gao Feng, a ministry spokesman, said domestic pork prices have fallen significantly since early November. In the next step, the ministry will work with relevant departments to actively take measures to ease price fluctuations in the market and ensure relatively stable supplies, Gao said at a weekly briefing.

This year, meat imports are expected to exceed 6 million metric tons, with pork and its by-products to surpass 3 million tons, he said.

In addition, more frozen pork will be put on the market to ensure ample supplies during the upcoming Lunar New Year holiday, he added.

An African swine fever outbreak has resulted in a shortage of pork followed by price surges. Pork accounts for more than 60 percent of China's meat consumption.

The government rolled out a variety of supportive measures to stabilize pork supplies and stabilize prices. For example, the country imported 1.32 million tons of pork in the first three quarters of this year, up 43.6 percent year-on-year, according to the Ministry of Commerce.

Prices of farm products fell from last week with reductions in wholesale prices of pork and eggs, the ministry said.

Wang Yupeng, a researcher in macroeconomics with Dongxing Securities, said in a research note that this cycle of pork prices will not get out of control, and will eventually stabilize.

"In the past several cycles, high pork prices have been accompanied by subsequent improvements in pig production. It indicates that when pork prices soar, hog farmers will expand production so that the prices will eventually drop due to increased supply," Wang said.

He added the government's ongoing measures have also helped speed up the recovery of hog production. Though optimistic about prospects, he warned of the possibility of further fever outbreaks.

In another development, the Ministry of Commerce said on Thursday that National Economic and Technological Development Zones will be further transformed and upgraded. So far, there are 219 such zones across the country.

The ministry will join efforts with other departments to promote the zones' high-level opening-up and high-quality development, Gao said at the news conference.

The zones will be encouraged to replicate the reform experiences of pilot free trade zones and give economic management authority to local governments, he said. The evaluation system for the zones' comprehensive development will also be optimized, Gao added.