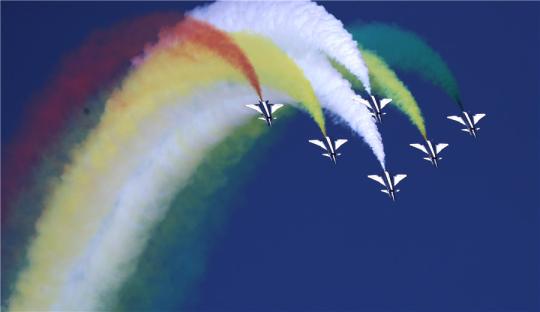 The Bayi (August 1) Aerobatics Team of the PLA Air Force perform during an air show celebrating the 70th anniversary of the force's foundation, held in Changchun, Jilin Province, on Thursday. (Photo by Zou Hong/chinadaily.com.cn)

The PLA Bayi Air Demonstration Team, China's best-known aerobatic team, is striving to become a world-class air display group as it keeps learning from those that preceded it, a team leader said.

Colonel Wei Guoyi, chief of staff of the team, said on Friday in Changchun, Jilin province, that his team, which belongs to the People's Liberation Army Air Force, has grown a lot over the past decade as a result of the rapid development of the force, citing team members' gains from their six overseas performance missions during this period.

"Through these overseas missions, we have witnessed the air force become stronger, and we also got the chance to expand our horizons and develop new ideas," he said at a news conference on the sidelines of an ongoing open house at an air base in Changchun to mark the Air Force's 70th birthday.

"Attending foreign air shows enables us to understand the gaps between us and top-tier aerobatic teams in the world and to contemplate how we can catch up," he said, noting the Chinese team has taken specific measures in this regard.

"We encourage innovation and creative ideas from our members. We work out two to three new aerobatic maneuvers each year," Wei said. "For instance, we improved our performance plan before coming to this open house to make our maneuvers more intense and more beautiful. We also devised a new method to perfect the effect of color smoke."