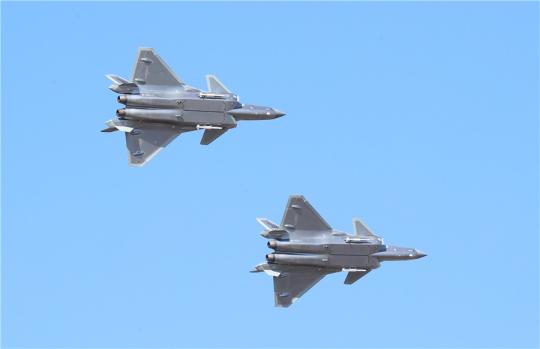 The Bayi team is performing 22 sets of solo and formation display maneuvers each day during the five-day open house, which concludes on Monday.

Senior Colonel Shen Jinke, the Air Force's spokesman, said at the news conference that the Bayi team is not only a display group but also a combat-ready unit.

"Their flight maneuvers are connected with their combat tasks and are close to fighting tactics," She said. "In addition to display drills, they also train to fly above complex terrains, such as mountain valleys, and they train at night to strengthen their combat skills."

The Bayi team was founded in 1962 as the Chinese military's first air display team and was named after the PLA's founding date, Aug 1. The elite unit has performed more than 660 aerobatic shows at home and abroad.

In another development, Shen announced at another news conference last week in Changchun that the PLA Air Force now has several young pilots capable of operating all of its J-20, J-16 and J-10C fighter jets.

Shen said that thanks to the expansion and innovation in the recruitment of new aviators, more flying talent has been emerging, and there will be more young air force pilots who can fight in multiple combat aircraft.

The J-20 is China's first and the world's third operational stealth fighter jet, as well as the country's most powerful combat plane. The J-16 and J-10C are also top air force fighter jets.

Experts said a pilot needs to have experience and outstanding skills to be able to fly such cutting-edge aircraft.