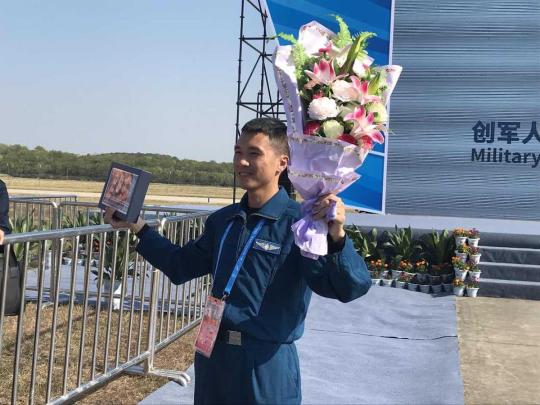 Liao Weihua wins the gold medal in the flying contest of the aeronautical pentathlon at the seventh CISM Military World Games in Wuhan, Hubei province on Oct 19, 2019. （Photo by Zhang Yangfei/chinadaily.com.cn）

The Chinese team won the gold in the flying contest of the aeronautical pentathlon at the seventh CISM Military World Games on Saturday morning in the games' host city, Wuhan, Hubei province.

In the event, participants competed as navigators and made orders to partner pilots to fly about 40 minutes on a triangular route. They were scored from three checkpoints to test their navigation accuracy and timekeeping.

Liao Weihua competed for China, with each participating country choosing one athlete to join the competition.

He said in an interview after the fly that "all went relatively smoothly and as expected".

"There were some difficulties. I was a bit nervous as it is my first time in such formal competition with so many excellent foreign contestants. I just tried to bring out my best from my previous training," he said.

Liao said he had been training for this competition since the PLA Bayi team of aeronautical pentathlon was set up in 2015. As this year was the team's first time in the military games, they had no previous experiences and depended on exploring their training methods.

Liao said after the competition that he felt their training worked well but also can be improved. He added that training for such an event also helped him boost his practical combat capabilities.

"For me personally, I hope I can continue to refine this technique and participate in the next Military World Games," he said, adding that his biggest expectation from the games is to pocket a gold medal for the Chinese delegation.

Frederico Brito from Brazil and Mikko Honkasalo from Finland won the silver and bronze, respectively.