China, U.S. urged to team up for food security 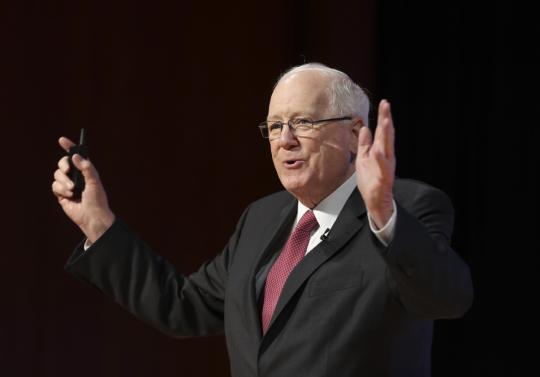 Conflict is one of the major challenges facing world food security, said Kenneth Quinn, president of the World Food Prize Foundation, on Wednesday as he also hailed the United States and China as the "two most significant entities in agriculture".

While naming nutrition, sustainability and climate volatility as the major challenges facing world food security, he said conflict could be an Achilles heel.

"Even if we do all of the other things, if we have conflict, insurgencies, instabilities from fighting and terrorists, these would disrupt the research and important global trade from sharing food around the world," Quinn told China Daily during the Borlaug Dialogue International Symposium in Des Moines, Iowa.

His point was echoed by Mark Green, administrator of the U.S. Agency for International Development and a former U.S. ambassador to Tanzania, who said in the opening keynote address that the biggest challenge is man-made, namely conflict.

He also stressed the importance of a stable food trading system in ensuring food security and the trade of agricultural products.

"The world food trading system counts on surpluses in some countries and trading to others. If we have countries that are at a deficit, people will go to where food is, as is the history of the world," Quinn said.

Kicked off on this year's World Food Day, the Borlaug Dialogue, one of the World Food Prize events, was themed "Pax Agricultura: Peace Through Agriculture". The symposium addressed the increasingly intersectional issues of food security, conflict and development.

As revealed in a UN report in July, more than 820 million people in the world are suffering from hunger.

"Food security is the world challenge of our time; in particular, we can see people in emerging economies are trying to figure out how to feed a growing nation while also preventing climate change," said Erin Fitzgerald, CEO of the U.S. Farmers and Ranchers Alliance.

"I haven't met a farmer around the world who does not care about nourishing lives. We have to figure out how we can work together," Fitzgerald said. She also advocated collaboration between farmers and farmer organizations.

Kirk Leeds, CEO of the Iowa Soybean Association, who develops export markets, has been to China more than 30 times. As China and the U.S. have already reached the "substantial phase-one deal" referred to by the U.S. side, he expressed his "significant concerns" and called for collaboration on both sides.

"We need to see the details; we've been on a roller-coaster ride, ups and downs. I'm hopeful, trying to be optimistic about the future trade opportunities with China, but I want to see the final deal before I'm confident," Leeds told China Daily. "As two major players, we need to get together."

As the leader of an organization of 42,000 Iowa farmers, he said the trade standoff has been "almost devastating", because China is "the biggest market".

Han Chen, co-founder and CEO of ZeaKal, an agricultural biotechnology company based in California, said: "Food should never be used as a bargaining chip. The world needs to work together to create the necessary productivity gains that will meet the demand of our growing population over the next three decades.

"Due to the urgency and necessity of this demand, we cannot put agriculture into the crosshairs of shortterm political disputes. Compared to the destabilizing effects of food insecurity, which will only be compounded by climate change, global trade concerns are really secondary."

Referred to as the Nobel Prize in food and agriculture, the World Food Prize was founded by agronomist Norman E. Borlaug, the 1970 Nobel Prize winner who helped recognize the achievements of others. The 2019 laureate is Simon N. Groot of the Netherlands, who works to provide vegetable seeds to millions of smaller farms around the world to help increase production.

China's He Kang, minister of agriculture in the late 1980s, and Yuan Longping, the "father of hybrid rice", were awarded the prize in 1993 and 2004, respectively, joining the 47 individuals who contributed to improving the quality, quantity and availability of food in the world.