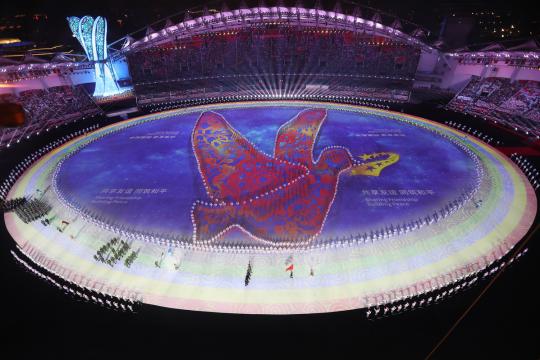 A huge dove is seen formed by people at the opening ceremony. (China Daily/Wang Zhuangfei and Xinhua/LI GA)

President Xi Jinping pledged on Friday that China will strive to make the 7th Military World Games of the International Military Sports Council an international gathering of peace that encourage military personnel to compete on a fair basis and enable diverse military cultures to develop exchanges and mutual learning.

Xi, also general secretary of the Communist Party of China Central Committee and chairman of the Central Military Commission, made the remark while meeting with leaders of defense departments and militaries of participating countries as well as officials from the council who attended the opening ceremony of the games in Wuhan, Hubei province.

The meeting took place before Xi announced the official opening of the games. A total of 9,308 military personnel from 109 countries will participate in a record 329 events across 27 competitions in the host city of Wuhan over the next ten days.

Xi told foreign guests that this year's event uses the slogan "Military Glory, World Peace" to express the hope that athletes of different countries fully display the sporting spirit of tenacity and use the power of sports to dispel the shadow of war, promote communication between different cultures and bring people together in peace.

He described the Chinese military as "an active participant, a positive promoter and an important contributor" to international military sports. Since it became a council member in 1978, the Chinese military has been actively working with other members to participate in the competitions, host the games and develop exchanges and cooperation, Xi added.

The Chinese military stands ready, taking the games as an opportunity to advance the innovative development of international military cooperation, strengthen exchanges and communication with militaries of various countries, promote pragmatic cooperation in various fields and fulfill international responsibilities and obligations, Xi said.

He added that the country's military is also willing to work with other countries' forces to cope with common threats and challenges in the security sector, make greater contributions to promoting world peace and advance the building of a community with a shared future for mankind.

Xi expressed the hope that participants will see the games as a way to learn more about China and the Chinese military in the new era. He also welcomed participants to attend the 9th Beijing Xiangshan Forum, a platform for Asia-Pacific security dialogue, to be held in the capital from Sunday to Tuesday, to build up consensus and contribute more wisdom to safeguarding world peace.

The opening ceremony of the games took place at Wuhan Sports Center and began with a parade of delegations, a flag raising as well as oath-taking by representatives of athletes and referees.

This is the first time the games are being hosted by China. This multiday event has been organized by the council every four years since 1995.

The numbers of participating athletes and events are also the highest in the games' history, with many athletes being world champions or known entities in Olympic events.

Led by flagbearer Wang Zhizhi, head coach of the Chinese men's basketball team at the games, the Chinese delegation marched into the stadium last as the games' host country. China sent the largest-ever delegation to this year's games with 553 athletes, coaches and support staff. They will compete in all categories except golf.

Herve Piccirillo, president of the sports council, said in his remarks at the opening ceremony that athletes and soldiers share values of resilience, courage, teamwork and fraternity as well as a spirit of duty and service to country.

Piccirillo said this year's games will be historic in terms of scale, influence and excellence. The mobilization of such a large number of council members to join the games demonstrates shared values and friendship.

"In this uncertain world, we are sending a message of fraternity, solidarity, tolerance and friendship. Tonight, you are all ambassadors of peace in the world," he said.

Piccirillo said beyond these values is a spirit of peace and sharing and "that is the spirit that we want to bring everywhere in the world".

The show featured high-tech elements including holograms to bring alive ancient scenes and figures. LED lights fixed around the stadium and at several levels interacted with moving images to provide the audience a multidimensional visual effect.

The main cauldron was lit by Liu Yudong, another hoops icon in China and currently the team leader of the men's basketball team at the games. The opening ceremony ended with the theme song of the games: Torch of Peace.