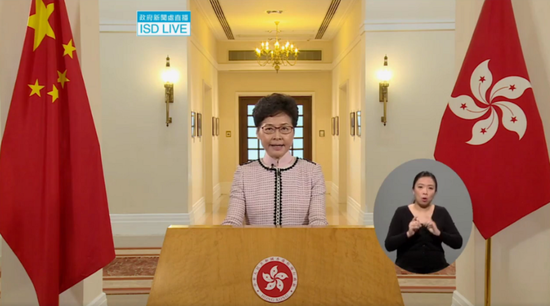 Chief Executive of China's Hong Kong Special Administrative Region (HKSAR) Carrie Lam said on Wednesday that Hong Kong will be able to get out of the impasse as long as the principle of "one country, two systems" is accurately adhered to.

Lam made the remarks while delivering the 2019 policy address.

"In the 22 years since Hong Kong returned to the motherland, 'one country, two systems' has proven to be the best system for ensuring the long-term prosperity and stability of Hong Kong," Lam said.

Lam pledged that the HKSAR will adhere to "one country, two systems" and safeguard the rights and freedoms protected by the Basic Law. "Any acts that advocate Hong Kong's independence and threaten the country's sovereignty, security and development interests will not be tolerated."

Lam also stressed the rule of law in handling the current crisis.

"As the integral components of the rule of law, a law-abiding population, strict and impartial enforcement of the laws, independent prosecutorial power and judicial independence must be respected by all and not be undermined," Lam said.

"I believe our society will agree that continued violence and spread of hatred would erode the core values of Hong Kong, disrupt social peace and undermine the excellent systems that took years of efforts to build," Lam said.

Lam appealed to every resident to cherish Hong Kong and safeguard its core values so that it can return to calmness.

Hong Kong Chief Executive Carrie Lam Cheng Yuet-ngor began her highly anticipated third Policy Address via video at 12.15 pm on Wednesday after she was prevented from speaking shortly after 11 am as scheduled as she was repeatedly heckled inside and outside the Legislative Council (LegCo) chamber.

Carrie Lam, Chief Executive of China's Hong Kong Special Administrative Region (HKSAR), on Wednesday announced a raft of short- and medium-term support measures to tackle the housing woes of Hong Kong, whose houses are among the least affordable in the world.