Beijing horticultural expo to lower its curtain on Wednesday 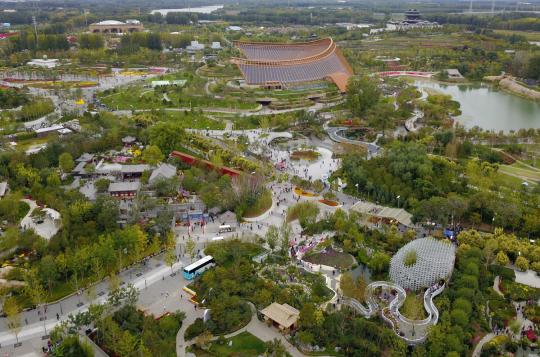 The sprawling Beijing International Horticultural Expo site in Yanqing district of Beijing is seen in this aerial photo, Oct. 6, 2019. (Photo/Xinhua)

The 2019 Beijing International Horticultural Expo, lasting for 162 days since it kicked off on April 28, will come to an end after a closing ceremony on Wednesday, a senior official with the expo's organizing committee said on Tuesday.

Gao Yan, chairwoman of the China Council for the Promotion of International Trade, vice-chairwoman of the expo's organizing committee and executive director of its executive committee, said at a press conference that Expo 2019 Beijing is the largest world horticultural exhibition up to now, and has welcomed the greatest number of participating countries, with 110 countries and international organizations taking an active part in the past few months.

The expo has held a total of 3,284 activities and attracted 9.34 million visitors from home and abroad since its opening, she said.

According to Gao, preparation for the expo's closing ceremony has finished. Premier Li Keqiang will attend the ceremony and deliver a speech on Wednesday evening, Gao added.

Leaders and senior officials from Azerbaijan, Cambodia, Kyrgyzstan, Pakistan and the Solomon Islands, as well as leaders from the Bureau of the International Expositions and International Association of Horticultural Producers, also will attend the ceremony.

In the future, the exhibition area will be transformed into a demonstration base of ecological civilization, a destination of ecotourism and leisure, and will play an important role in supporting the 2022 Winter Olympics. It is also expected to boost the night economy in northwest Beijing, according to Zhou Jianping, executive deputy director of the expo's coordination bureau.