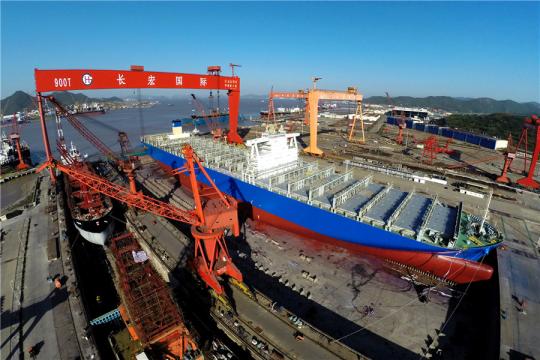 A ship being built at a dry dock in Zhoushan Changhong International Shipyard Co in Zhejiang province. (Photo by Yao Feng / For China Daily)

Oman Shipping Co, the shipping arm of Omani logistics firm Asyad Group, expects to generate at least 20 percent of its revenues from China in the next few years and possibly build some more of its ships at Chinese shipyards, a senior company executive said.

"We hope to expand the contribution of the Chinese market to about 15 percent to 20 percent of OSC's overall revenue in the coming years based on the strong and increasing ties between China and Oman, as well as China's growing demand for commodities and energy related products (crude oil and liquefied natural gas for example)," said Michael Jorgensen, the acting chief executive officer of Oman Shipping.

Jorgensen said OSC is satisfied with the efficiency and quality of its latest order placed with Chinese shipyard Zhoushan Changhong International Shipyard Co Ltd. The order took just two months to be executed after the deal was inked. The second 63,500 deadweight ton bulk cargo vessel was delivered to Oman Shipping Company last month.

"The vessels were originally slated to be built for New Yangtze Navigation, a shipping subsidiary of the Jiangsu Xin Chang Jiang Group, but was delivered to OSC instead," said Lin Feng, general manager of the Shanghai commercial center with Zhoushan Changhong.

According to Lin, it takes at least 18 months to build a bulk cargo vessel.

Zhoushan Changhong is very competitive in building feeder container and LNG bunkering vessels. At this time, the company has vessel orders worth more than $400 million. Those ships are to be delivered between 2020 and 2021.

"We see now that the Chinese shipyard industry is coming back on a stronger footing. We see consolidation among the shipyards here, and we also see there are good private shipyards that are delivering good value here," said Jorgensen.

In response to growing customer demand, OSC is going to increase fleet capacity by up to 30 additional vessels over the next five years as part of its expansion plan.

"As we need additional capacity quickly, we are open to all options - including second-hand and leased vessels, as well as new builds. Should we proceed with new builds, Chinese shipyards are strong contenders for the orders due to their expertise in the categories of vessels that we are interested in," Jorgensen explained.

"It is commonly known that China is the world leader in building small container fleet vessels, so China has a good position in the market," he said.

In March, CMA CGM chairman and CEO Rodolphe Saade and CSSC chairman Lei Fanpei signed an agreement to build 10 of the 15,000-TEU container ships. Five of them will be LNG powered vessels.

"The capability of delivering an LNG powered vessel is proof of the high standard of Chinese shipbuilding technology," said Wu Siwei, a container ship expert with Hudong-Zhonghua.

Chinese shipbuilders are starting to shine by being competitive in quality, technology, speed and price, and have considerably narrowed the gap between Chinese shipyards and the world's top shipbuilders, Wu added.

As a result, Chinese shipyards maintained their leading position by taking away the lion's share of the business in a sign of the strength of the country's shipbuilders despite global consolidation in the industry as new orders halved in the first eight months of the year, analysts said.

China accounted for 200 vessels of the new contracts, followed by South Korea with 124 and Japan with 91. The three countries accounted for 35.93 percent, 35.85 percent and 11.8 percent respectively in terms of CGT (compensated gross tonnage).

In another key indicator of total orders, Chinese shipyards have taken a leading position by accounting for 48.34 percent of global orders, and 35.89 percent of CGT.

"The global shipping turmoil in the past few years contributed to low shipbuilding demand, but Chinese shipyards showed their resilience in such a low market," said Zhou Dequan, a research director from the Shanghai International Shipping Institute.

"Indeed, the shipbuilding demand is low for the moment, but we are quite confident about the outlook beyond 2022, when we expect a market rebound," said Lin.