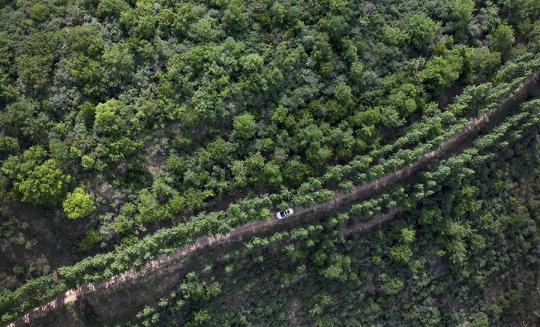 Trees cover a hillside in Wuqi, Shaanxi province, the first county involved in the Conversion of Cropland to Forest and Grassland Program, in June. (Photo/Xinhua)

Editor's note: To celebrate the 70th anniversary of the founding of the People's Republic of China, we are publishing a series of stories reflecting changes and developments in fields such as law, education, transportation and the environment. This is the sixth in the series.

A deadly sandstorm on May 5, 1993, is an unforgettable memory for Shi Yinshan, a resident of Gulang county in the northwestern province of Gansu.

Gulang used to be hit by sandstorms every three to five days on average. In most cases, the sand swept through in a few hours, leaving a thick layer across the county. However, the storm in 1993 killed 85 people, including 23 schoolchildren.

"An enormous sandstorm came suddenly, like a black wall reaching up into the sky. It moved so fast, the sky turned dark in a few minutes. We couldn't even see our hands," Shi said.

Lasting about four hours, the sandstorm killed the primary school students on their way home. Their bodies were found floating in a river they had to cross twice a day on their journey to and from lessons. In addition, 260 people were injured and 31 reported missing. Their bodies were never found.

More than 120,000 livestock were killed or went missing, and 3,700 square kilometers of farmland were buried under the sand.

Shi is a second-generation tree planter in Gulang. His father Shi Man was one of six men who "fought against the desert" in the early 1980s at the Babusha Forest Station in the south of the Tengger Desert-the fourth largest in China-which conducts forestry work designed to prevent the advance of desertification and reclaim arid land.

The disaster happened just a year after Shi Yinshan took over his father's job, shouldering the responsibility of greening the desert. The painful memory made him even more determined to pursue his mission.

"We cannot be defeated by the sand. Gulang is our home. If we do not safeguard it, who will do it for us?" he said.