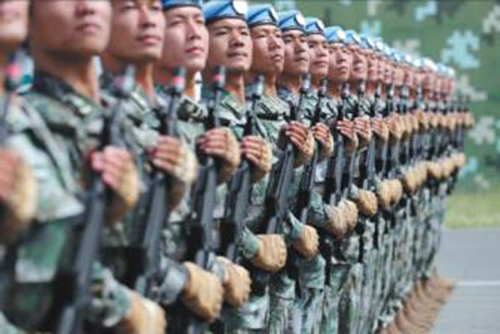 Soldiers attend a training session this month to prepare for the military parade in Beijing on Tuesday marking the 70th anniversary of the founding of the People's Republic of China. (CHINA DAILY/KUANG LINHUA)

The coming National Day parade will demonstrate the latest developments in the Chinese military's efforts to strengthen its joint operational capability, according to parade organizers.

Major General Cai Zhijun, a senior official from the Central Military Commission's Joint Staff Department and deputy director of the Office of the Parade Leading Group, said at a news conference in Beijing on Tuesday that the armed forces have been striving to improve their cooperative abilities in joint combat operations, a major goal of ongoing military reform.

He said the organization and arrangement of the parade will comprehensively demonstrate the military's capabilities in joint operations, joint training and integrated logistics support, which have been enhanced through military reform launched in late 2015.

China will stage a grand military parade on Oct 1 to celebrate its 70th birthday. This will be the country's 18th military parade since the People's Republic of China was founded in 1949 and the 15th National Day parade.

Cai said the parade will last about 80 minutes and will involve some 15,000 members of the People's Liberation Army, People's Armed Police Force as well as China's militia and reserve service.

The number of high-ranking officers with a rank of major general, rear admiral or higher who will take part will be more than in any previous parade in China, he said.

There will be 15 marching units in which troops will move down Chang'an Avenue on foot. A total of 580 weapons and equipment in 32 units will show China's prowess in land and sea combat, air and missile defense, informational operations, unmanned tasks, logistic support and strategic strikes. In addition, over 160 fighter jets, bombers, early-warning and control planes and attack helicopters in 12 units will display the country's air power, he said.

Major General Tan Min, deputy chief of staff of the PLA Central Theater Command and spokesman for the PLA Parade Joint Command, said at the news conference that all the military hardware shown at the parade is domestically developed and produced and some are new types of weapons deployed by the armed forces in recent years.

Most of the weapons and equipment have high levels of informational capability that result in better performance in terms of command and control, strike accuracy, battlefield compatibility and fighting efficiency, he said.

Responding to a question on which advanced weapons will be present and whether the DF-41 intercontinental ballistic missile will take part, the officer said, "There is only one week before the parade. Please wait and see. I am sure you will not be disappointed."

Senior Colonel Wu Qian, a Defense Ministry spokesman, said at the briefing that China has no intention to "flex its muscles" through the parade, and does not think that is needed.