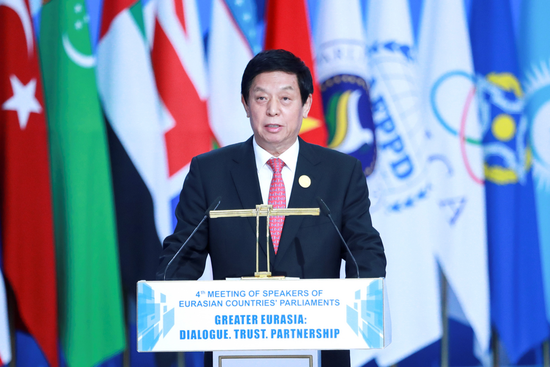 Li Zhanshu, chairman of the Standing Committee of the National People's Congress of China, delivers a keynote speech at the opening ceremony of the Fourth Meeting of Speakers of Eurasian Countries' Parliaments in Nur-Sultan, Kazakhstan, Sept. 24, 2019. (Xinhua/Zhai Jianlan)

Li, chairman of the Standing Committee of the National People's Congress of China, made the remarks when delivering a keynote speech at the opening ceremony of the Fourth Meeting of Speakers of Eurasian Countries' Parliaments (MSEAP) held in the Kazakh capital.

Li said that the world is undergoing profound changes unseen in a century. "Cooperation or confrontation? Openness or closing the door? Win-win progress or a zero-sum game? The interests of all countries and the destiny of mankind hinge on the choice we make," he said.

China has proposed the idea of building a community with a shared future for mankind, worked for a new type of international relations and contributed to promoting a fairer, more just and equitable global governance system, Li said, adding that the Belt and Road Initiative has created opportunities for the common development and prosperity of all participating countries.

Li said that Eurasia, the biggest landmass and the most populous continent on Earth, has the fastest development speed and the most promising future. The interests and future of Eurasian countries are closely interconnected.

He raised four-point proposals for Eurasian countries to enhance their ties.

Secondly, they should expand economic and trade ties and promote trade and investment liberalization and facilitation, in order to make the world economy more open, inclusive, balanced and beneficial for all, he said.

Thirdly, cooperation in such fields as culture, education, tourism, sports, media and youth should be strengthened to promote people-to-people exchanges among Eurasian countries.

What's more, he suggested that Eurasian countries strengthen communication between legislative bodies and implement important consensuses reached by leaders of the countries to help promote their relations.

Referring to the forthcoming 70th anniversary of the founding of the People's Republic of China, Li highlighted China's marvelous achievements in the past decades under the leadership of the Communist Party of China.

He underlined that China's development is a development featuring peace, cooperation and openness, adding that China has pursued development with its door open and actively participated in economic globalization while seeking no exclusionary blocs.

As a member of Eurasia, China regards countries on the continent as important partners, Li said.