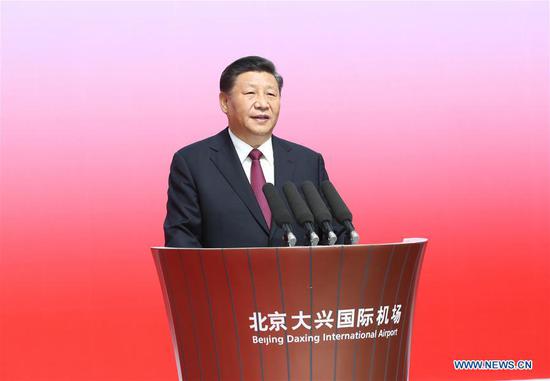 Chinese President Xi Jinping, also general secretary of the Communist Party of China (CPC) Central Committee and chairman of the Central Military Commission, attends the operation ceremony of the Beijing Daxing International Airport on Sept. 25, 2019. Xi announced the official opening of the airport and inspected the airport's platforms and check-in hall. (Xinhua/Ju Peng)

Xi, also general secretary of the Communist Party of China (CPC) Central Committee and chairman of the Central Military Commission, attended the operation ceremony of the airport on Wednesday morning.

Xi stressed that the new airport, which was built in less than five years and put into operation smoothly, has shown China's prowess in engineering construction.

It is also a display of the political advantages of the CPC leadership and China's socialist system that can mobilize all sources to make great achievements, said Xi.

While inspecting the rail transit of Daxing Airport Express at Caoqiao station, Xi stressed that urban rail transit marks the direction for future transportation development in large modern cities, and the development of rail transit is an effective way to solve "big city malaise" and to build green and smart cities.

Beijing should continue to develop rail transit in a bid to build a modern international metropolis, Xi said.

Then Xi took the subway heading for the Beijing Daxing International Airport.

On the way, he inquired in detail about the design and production of the rail trains, ticket prices, baggage consignment and connection with other traffic lines.

Xi stressed that transportation should precede urban modernization, and the Daxing International Airport should fully play its role in serving the coordinated development of the Beijing-Tianjin-Hebei region.

He said that building a comprehensive transportation system with internal and external traffic connections is essential to improving the operational efficiency of the airport.

Advanced management concepts and modern information technology should be employed to make the management and operation more intelligent and convenient, he said.

When inspecting the airport's platforms and check-in hall, Xi called the airport a significant landmark project of Beijing which would contribute to the coordinated development of the Beijing-Tianjin-Hebei region.

He urged the three areas to seize the opportunity to strengthen coordination and cooperation and accelerate the pace of promoting regional high-quality development.

At the check-in counters, Xi saw how self-service paperless check-in was done, acknowledged the airport's application of modernized facilities to provide passengers with convenient services and urged more efforts to develop the airport into a world-class aviation hub.

At the International Departure area, Xi met with delegates responsible for airport construction and operation.

Xi said that the new airport has demonstrated the great ambition and strategic vision of the Chinese people and displayed the spirit and modern craftsmanship of the nation.

He encouraged builders to march forward and persist in making new contributions.

Chinese Vice Premier Han Zheng also attended the ceremony, saying that the opening of the airport is of great significance to enhancing the international competitiveness of China's civil aviation industry, better serving the country's opening up and promoting the coordinated development of the Beijing-Tianjin-Hebei region.