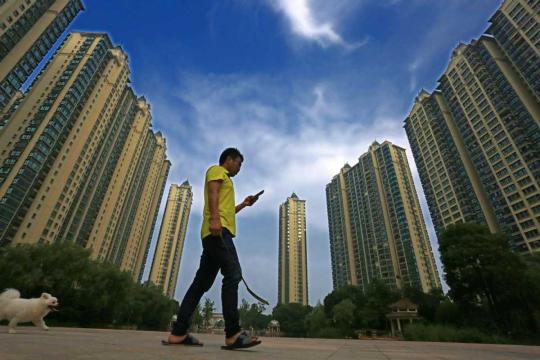 A pedestrian walks past a residential enclave in Huaian, Jiangsu province, on July 28. (China Daily/Zhou Gangguo)

China's residential property market, which is still considered a key economic indicator, may appear down and out at the moment, but unexpected good tidings are adding to the buoyant mood generated by the celebrations of 70 years of the founding of the People's Republic of China.

Like the economy, China's residential property industry is transitioning from high growth to high quality. And that is a game-changer with potential long-term implications for the whole economy, experts said.

Despite factors like many top realty players missing first-half revenue targets, the government's stringent rules continuing to keep a lid on runaway prices, and financially strained investors turning cautious on new developments, the industry is all excited about the future.

It's a future that experts said will be marked by innovation. Technological advances, accelerating urbanization and rising environmental awareness among people are expected to lead to smarter and greener buildings everywhere, sparking a new long-term property revolution that would help tide over the current short - and medium-term concerns.

The future of properties will be in line with the central government's emphasis that homes are for living, not for speculative investments.

"After decades of rapid residential property development, the demand-supply situation has reached a new stage of quality development. We think the central government, property developers and Chinese people are all at a turning point as the function of real estate is being redefined," said Chen Sheng, president of the China Real Estate Data Academy.

Part of that optimism stems from the Chinese government's resolve to establish a long-term mechanism for the stability of the hitherto volatile real estate sector. The tendency to treat property as a short-term economic stimulus tool, or as a key source of local government income, or as an avenue for speculative investments is already a thing of the past, said Chen.

"To boost the economy, other tools such as tax reform, regional development, promotion of innovation, and financial opening-up are being used," said Yao.

Xie Chen, head of research with CBRE China, said, "It is a good opportunity for developers with strong credit credentials to go on an M&A (mergers and acquisitions) spree. It is also a good time to think about diversifying investments."

Such views started gaining circulation after 12 leading real estate developers, including China Vanke, Country Garden, and Evergrande, reported first-half revenues of over 100 billion yuan ($14.13 billion) each. But some among the top 10 developers failed to reach their half-year targets.

"Developers need to pay more attention to their financial resilience. Considering that the lending environment is still tight and the debt repayment peak is nearing, developers need to formulate a more selective strategy when making investments," said Xie.

Big-ticket realty investments may resume on the back of urbanization. In fact, experts expect significant growth in demand for even commercial real estate.

The current scene is enthusing not just industry insiders and external experts but consumers such as Li Shuqi, 41, a Shanghai-based white collar worker at a multinational company. She believes ordinary people have a decent chance now to buy or change homes.

Li was born in 1978 when China embarked on reform and opening-up. She is part of the lucky generation that got to witness the rapid development of China's home market.

In a shantytown in Changning district of Shanghai, Li was raised in a cubbyhole of a home that sheltered not just herself and her parents but her aunt.