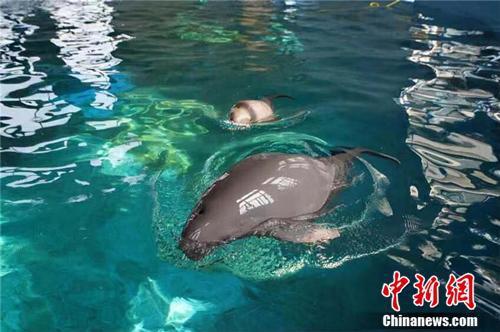 The calf is seen with its mother. (Photo provided by the Institute of Hydrobiology, Chinese Academy of Science in Wuhan)

Chinese animal lovers on Sunday celebrated the 100-day anniversary of the birth of the first calf born to a Yangtze River dolphin kept in a completely artificial environment at the Institute of Hydrobiology, Chinese Academy of Sciences (CAS) in Wuhan, capital of Central China's Hubei Province.

"The healthy calf shows a new breakthrough has been made in terms of the breeding and conservation of Yangtze River dolphins," academy member Cao Wenxuan said at the celebration ceremony for the rare and critically endangered species.

"It is also remarkable step for the critically endangered Yangtze River dolphin."

Born on June 11, the calf was named "F9C" and is clever, healthy and quickly picking up fishing skills.

Her father is 14-year-old Tao Tao, the first Yangtze River dolphin to be successfully bred in an entirely artificial environment.

According to the Shanghai-based news site thepaper.cn, Chinese people, especially children, are increasingly participating in the protection of dolphins.

The Wuhan Baiji Conservation Foundation and other institutions have built seven out of 50 planned schools for Yangtze River dolphin conservation.

Students at those schools will have a chance to participate in social activities like charity sales to generate money for the dolphin's conservation.

Students will also attend classes and lectures about the Yangtze River dolphin and the ecological environment of the river, local media reported.

A 2017 scientific survey found about 1,012 finless porpoises in the Yangtze River, thepaper.cn reported.

The average life expectancy of a Yangtze River dolphin is 20 years, CCTV reported.