Solomon Islands to benefit from China ties, its FM says 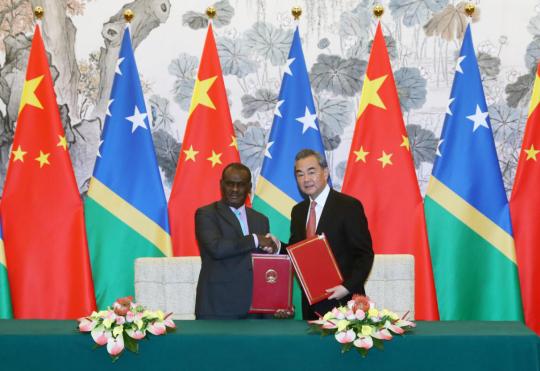 Wang Yi, State councilor and foreign minister, and Jeremiah Manele, foreign affairs and external trade minister of the Solomon Islands, release a joint communique on the establishment of diplomatic relations between the two countries in Beijing on Saturday.(Photo/CHINA DAILY)

Solomon Islands' Minister of Foreign Affairs and External Trade Jeremiah Manele rebutted the claim on Sunday that Beijing was using "dollar diplomacy" to induce his country to break ties with Taiwan.

His country's sovereign decisions "cannot be bought", he said.

In an interview with China Daily in Beijing, Manele said such claims "are not true" and that the decision to establish diplomatic ties with the People's Republic of China is based on the international law and national interests.

"We reviewed the United Nations Resolution 2758, which recognizes the one-China policy," he said. "Much more important is that the decision is in our best interests as a sovereign country."

China and the Solomon Islands established a formal diplomatic relationship on Saturday.

According to a joint communique signed by Manele and Wang Yi, Chinese State councilor and foreign minister, the government of the Solomon Islands recognizes that there is only one China in the world, that the government of the People's Republic of China is the sole legitimate government representing all of China and that Taiwan is an inalienable part of China's territory.

At a joint news conference with Manele, Wang said, "China must, and will eventually achieve, national reunification."

He said Taiwan has been and will continue to be an inalienable part of China's territory, both in fact and by right and law, and this status will not and cannot be changed.

Noting that there are only a handful of countries that have not established diplomatic relations with China, Wang said visionary people in those countries will increasingly speak up for justice in keeping with the trend of the times.

Solomon Islands' Prime Minister Manasseh Sogavare said in a statement on Friday that recognizing China's sovereignty under UN Resolution 2758 is supported by all UN members except a small number of underdeveloped nations.

"We would simply be irresponsible to isolate a major willing player to assist in developing the least developed countries in pursuance of the UN Sustainable Development Goals," Sogavare said.

He assured the people of the Solomon Islands that the country will greatly benefit from formal relations with China and the Belt and Road Initiative, and will pump in a lot of directly linked infrastructure development to spur its economy.

Manele characterized the BRI as "an important initiative" in light of the huge challenges facing the Solomon Islands and other Pacific Island countries and said cooperation with China will bring them development opportunities.

"We need global cooperation, working with other countries in the world, including China, to address some of the issues and challenges," he said. "My government will embark on looking at the specific plans and proposals we would like to pursue with China under the initiative."

Cooperation with China is a new form of South-South cooperation, Manele said, and China's approach is an opportunity for all developing countries to work together to advance their mutual interests.

Solomon Islands is the sixth country to cut ties with Taiwan authorities and establish diplomatic relations with China since Tsai Ing-wen became the island's leader in 2016.