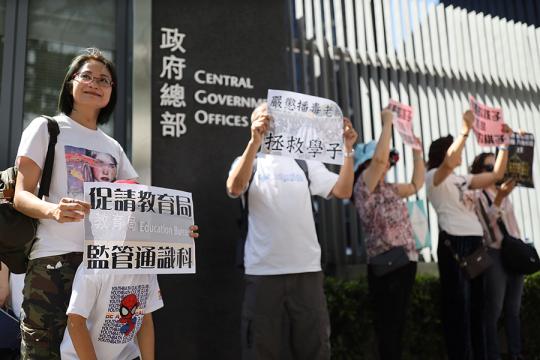 About 60 Hong Kong parents protest children being exposed to politics in schools at the Central Government Offices in Admiralty, Hong Kong, on Sunday. (Photo/China Daily)

More than 3,000 young people from Guangdong province and the Hong Kong and Macao special administrative regions promised on Sunday to further expand exchanges and cooperation to build great futures for their hometowns.

In a gathering marking the 70th anniversary of the founding of People's Republic of China, they presented a proposal to call on the youth of Guangdong, Hong Kong and Macao to seize the historical opportunities to cooperate in devoting themselves to building the Guangdong-Hong Kong-Macao Greater Bay Area to realize their dreams in the region.

They vowed to maintain peace, stability and tolerance and oppose violent and destructive acts while building the Guangdong-Hong Kong-Macao Greater Bay Area.

In a national flag raising ceremony, they sang Ode to the Motherland to express their patriotism toward China, which will celebrate its 70th birthday on Oct 1.

Angus Ng Hok-ming, chairman of the association, said he hoped the event would help Hong Kong and Macao youths to better understand their motherland.

He urged Hong Kong and Macao young people to pioneer businesses in the Greater Bay Area, where many opportunities have been created by China mapping out the area's development plan.

"I hope the event will help build a platform for the youth of Hong Kong and Macao to start their businesses in the bay area," he told China Daily.

Edwin Wan, of Hong Kong, said building the Greater Bay Area has provided myriad employment opportunities in Hong Kong and Macao and that the youth of the two SARs should seize the opportunities.

Sammi Fu, of Hong Kong, said the two SARs have established close relations with the mainland and the youth of the SARs should be encouraged to start business or seek employment opportunities in the Greater Bay Area, which includes nine cities in Guangdong, plus Hong Kong and Macao.

Ally Li, of Macao, said she was thrilled to see the great changes taking place in China in recent years and Macao residents should increase their visits to the mainland to deepen their understanding of the motherland.

Feng Shanshan, an associate professor at the Xinghai Conservatory of Music in Guangzhou, said she was happy to have the chance to expand exchanges with Hong Kong and Macao youths and to join hands in celebrating China's 70th birthday.

"The exchanges and cooperation will help Hong Kong and Macao youths to learn more about their motherland," she said. Feng was the lead singer in the rendition of Ode to the Motherland at the gathering.

Youths from the three regions also visited major scenic spots and Hong Kong and Macao youth startup projects in the metropolis on Sunday.

On Saturday, they visited Foshan and Jiangmen in the Guangdong-Hong Kong-Macao Greater Bay Area.