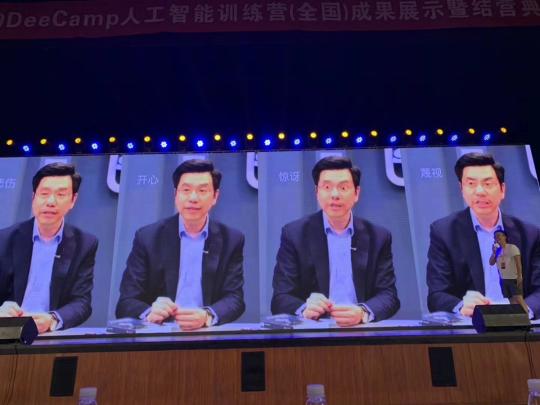 A meme featuring renowned artificial intelligence expert Kaifu-Lee smiling is made into four other memes showing immediate changes in different moods during the closing ceremony of DeeCamp, one of China's largest AI training camps, on Aug 16, 2019 in Beijing. (Photo provided to chinadaily.com.cn)

At the closing ceremony of this year's DeeCamp, one of China's largest AI training camps, a meme where renowned artificial intelligence expert Kaifu-Lee is smiling has been made into four other memes showing immediate changes in different moods.

Unexpectedly, it is a project made by a group of Chinese students who leveraged AI to make memes during their three-week study at DeeCamp, which matched AI experts in the field as mentors to students from across China to use AI to solve problems.

"Currently in China, AI is transforming traditional industries. However, the process has faced huge bottlenecks due to the lack of talents in the country," said Kaifu-Lee, chairman and CEO of Sinovation Ventures, the initiator of DeeCamp.

China surpassed the US in the number of emerging AI projects last year and accounted for over half of the total projects but in terms of global AI talent, China made up only 5 percent of the total, according to a Goldman Sachs report.

"We hope to build DeeCamp into a pilot program to nurture an AI training system joining experts in the field and students from across China," Lee said.

Over 600 students made it into this year's summer camp from over 10,000 applicants. They came from over 1,000 universities in China and participated in the camp in Beijing, Shanghai, Guangzhou and Nanjing.

Wang Yonggang, executive director of the AI Institute at Sinovation Ventures, noted that it is to his surprise that a lot of the AI programs have huge business potential even though they were developed within a short time.