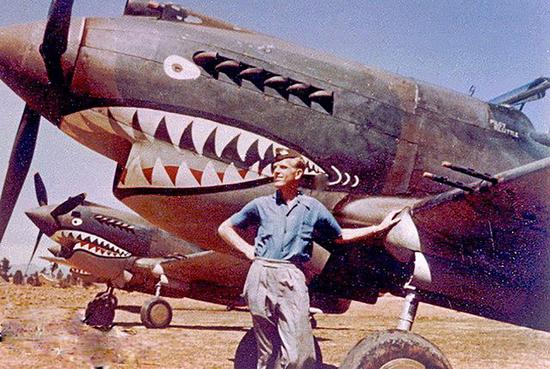 "He was confident that with adequate support, the Allies would drive out the Japanese invaders," the professor emerita with the University of Florida, told Xinhua on Wednesday.

"He worked hard for this goal," said the 69-year-old, who traveled frequently between the United States and China, dedicated to cultural and people-to-people exchanges, an effort she deemed vital for the friendship long forged by the two nations.

In 1941, General Chennault, commander of the U.S. 14th Air Fleet, recruited the American Volunteer Group, which was later known as the "Flying Tigers."

During WWII, the U.S. general trained, organized and inspired both American and Chinese pilots to overcome language and cultural barriers. The "Flying Tigers" helped transport arms and other materials to support China's fight against the Japanese invaders.

"It completely changed his life," she said. "He had never been to China before, and within a very short few months, he developed profound respect for Chinese people, and their bravery and perseverance in such difficult circumstances."

"It was an opportunity for him to prove his aviation theory and his fighter pilot theory. So it's a dream come true for him," she said. 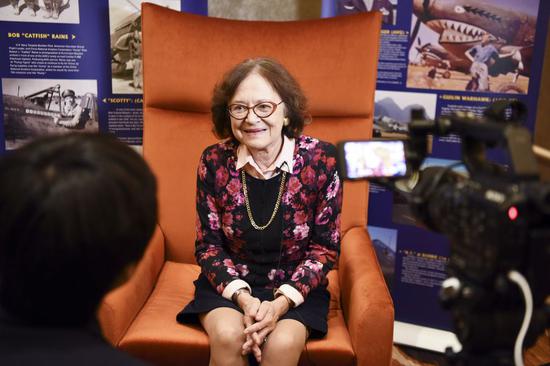 When her father died in 1958, Chennault was only eight years old. She made her first trip to the Chinese mainland in 1981 during which she explored more about her father.

"When talking to people on streets, some had memories of that time and said my family helped to build the runway," she said, while recounting that visit.

She was even surprised that there were many more "Flying Tigers"-themed museums set for the past years, which she thought was "very positive" as the joint efforts have been widely recognized and remembered.

The expert in Chinese culture, who attributed her career choice largely to her father, said she expects a new chapter could be written based on the U.S.-China WWII friendship.

Chennault has been echoed widely by other "Flying Tigers" families on the significance of shared golden memories and the joint efforts to continue the friendship.

The sacrifices Chinese and Americans made side by side in the war are our common heritage which should be cherished by our two countries, said Beneda, vice chairman of the Sino-American Aviation Heritage Foundation (SAAHF).

"We disagree from time to time, but the important thing is remembering the history, remembering the investment that we have in the lives of the Chinese and the Americans," he added.

Beneda said his father regarded the China experience a valuable lesson, namely to be good to others and to serve.

"We consider the Chinese people as part of our family. I'm not talking about just the ones that saved my father's life, but we have a very profound and strong relationship with all the Chinese people," Beneda said emotionally.

To fulfill his father's wish and educate younger generations, Beneda committed himself to documenting and publicizing the U.S.-China relationship in the war that brought the two countries close together as friends and allies.

For 63-year-old James Bryant, son of Flying Tiger veteran James E. Bryant, who joined the army in the early 1940s and went to China after receiving pilot training in 1944, it was the shared dream by peoples of the United States and China that created miracle in the wartime history.

Bryant told Xinhua that he honored all of the American and Chinese veterans during the wartime for their bravery and sacrifice. "The world that I grew up in would have been a lot different if America and China had lost the war," he said.

"Friendship never happens accidentally. They're the consequence of shared dreams and common experiences during the Flying Tiger times. So, that's exactly what evolved between the Flying Tigers and the people of China," Bryant emphasized. 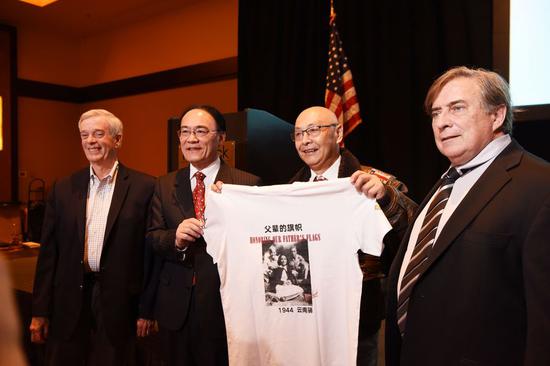 Chinese Consul General in San Francisco Wang Donghua (2nd L), Jeffrey Greene (1st R), Chairman of the Sino-American Aviation Heritage Foundation, and other guests present a T-shirt with the forum theme of "Honoring Our Father's Flags" at a Flying Tigers conference in Las Vegas, the United States, May 10, 2019. (Xinhua/Han Fang)

Bryant's first trip to China was in 1992, and he spends quite a lot of time in China each year.

He visited places where his father had battled against Japanese troops and visited Flying Tigers museums, where he learnt more about what his father and other veterans did during the war.

Bryant believed that his father's great impact on him is his vision of globalization, so he linked his business with global cultural exchanges.

"Flying Tiger is a symbol of China-U.S. friendship and cooperation, and I expect it can last long," Bryant said.

Jeffrey Greene, chairman of SAAHF and expert on Flying Tiger history, said, in the past 24 years, his foundation has arranged China visits for hundreds of Flying Tiger veterans and held related forums and activities in a number of U.S. cities, promoting further understanding and friendship between of the peoples of the two countries.

"It is important to remember the U.S.-China friendship that was established during WWII and it's a proved victory," Greene said. Enditem