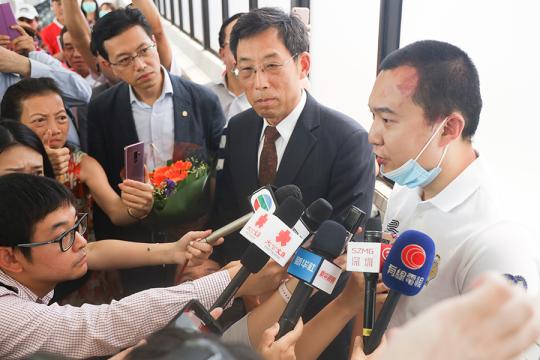 Fu Guohao, a Global Times website reporter who was illegally detained, restrained with plastic zip ties, verbally abused and beaten by protesters at the Hong Kong International Airport on Tuesday, was discharged from a Hong Kong hospital at noon on Wednesday.

Fu spoke to the media after his discharge from Princess Margaret Hospital in the New Territories of the Hong Kong Special Administrative Region. Though he had some bruises on his face, Fu said he did not suffer serious injury.

Fu thanked the public for their care and concern and said he still loves Hong Kong.

Fu was dispatched by Beijing-based Global Times to cover the mass protests in Hong Kong. The sit-in at the airport that started on Friday virtually paralyzed the operations of the international airport for two days.

Fu, who had been wearing a yellow press vest, had his arms and legs restrained with plastic ties for almost an hour and also had flashlights shined in his eyes. A video of the incident, widely circulated online, shows those that detained him asked him for his press credentials, accused him of being a fake journalist, stripped him of his vest and searched his bags.

While tied up and surrounded by the group, Fu shouted: "I support Hong Kong police. You can beat me now."

Medics managed to free Fu, but the protesters continued to beat him as he was being taken to an ambulance, the video shows.

The incident led to expressions of shock from around the country. Shortly after Fu was detained and beaten, Global Times Editor-in-Chief Hu Xijin confirmed on his Weibo account that Fu is a reporter for the media organization.

Hu said the attack on the reporter was "shameless" and "cowardly". He urged protesters, who he called "mobs", to exercise the most basic principle of respect and refrain from hurting journalists.

"If these radical protesters in Hong Kong can conduct a brutal persecution of journalists, then you tell me, should we stop calling you mobs, but instead 'terrorists'?" Hu said.

On Wednesday, the All-China Journalists Association strongly condemned the attack on Fu. The association expressed its deepest sympathy and highest respect for the reporter.

It said journalists' personal rights and rights to exercise their profession should not be violated by any means. The brutal attack and illegal detention of the reporter by rioters caused injuries and were violent crimes, it said. The acts violate the legitimate rights and interests of journalists, challenge and insult the global media and trample on press freedom, the association said.

The association said it will work to firmly safeguard the rights of journalists to conduct interviews and it strongly supports them in conducting normal reporting activities. It also urged relevant parties to severely punish those who endanger journalists' safety and their right to work.

In a letter to Global Times' Hu, the Hong Kong Association of Media Veterans condemned what happened to Fu. The association, with a membership of more than 1,000 media workers, said Fu has shown the world how to be a professional reporter.

The Hong Kong Federation of Journalists also expressed its strong condemnation of the incident, calling such atrocious acts unacceptable, especially at the city's airport, a highly visible location used by international travelers.

The Newspaper Society of Hong Kong said it is "deeply concerned that many reporters have been victimized while covering mass rallies in recent months", including being subject to "insults and attacks to having their reporting activities disrupted". It said the situation, as shown by what happened at the airport, is getting worse by the day.

The Democratic Alliance for the Betterment and Progress of Hong Kong said what the protesters did to Fu was brutal and reckless. It tainted Hong Kong's reputation in the international community, the city's largest political party said in a statement.

The Federation of Trade Unions, the city's largest union, also denounced the incident, saying that what the rioters did was lawless and in defiance of the city's rule of law, morality and ethics.

Wang Keju contributed to this story.