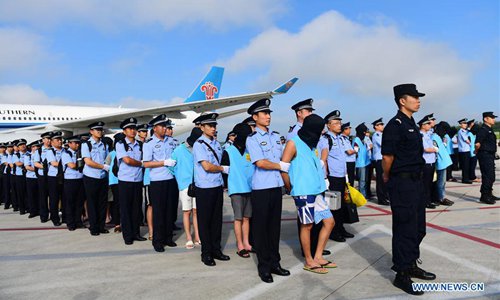 China's Ministry of Public Security (MPS) has requested local-level police organs speed up efforts in building an effective intelligence command system to prepare for the upcoming celebration of the 70th anniversary of the establishment of the People's Republic of China.

To better maintain nationwide security and political security, police intelligence departments should hasten building "a unified, efficient and authoritative intelligence command system," Zhao Kezhi, minister of the MPS said at a conference held in Beijing on Tuesday, cpd.com.cn, a site affiliated with the ministry reported on Wednesday.

Ahead of the major event, police across the country need to be alert to all kinds of criminal activities especially potential sabotage from overseas anti-China forces and pro-secession forces since "recently rioters have been creating chaos and violence across the Hong Kong Special Administrative Region under the support of foreign force," Li Wei, a counter-terrorism expert at the China institute of contemporary international relations in Beijing, told the Global Times.

Some domestic violence and mass incidents are also likely to challenge the police during the special moment, which needs an intelligence system to monitor, Li said.

The intelligence departments from different places are relatively independent. If unified, police could make more effective judgment in dealing with the emergency, said Wang Hongwei, a professor at Renmin University of China's school of public administration and policy in Beijing.

MPS announced that police across China will be required to conduct combat drills to improve their ability to safeguard national political and social stability. Police departments will strengthen basic training of all police officers and focus on improving abilities to prevent major risks and maintain stability and security, the MPS announced on its website Friday.