At least 6 police officers shot in U.S. city of Philadelphia 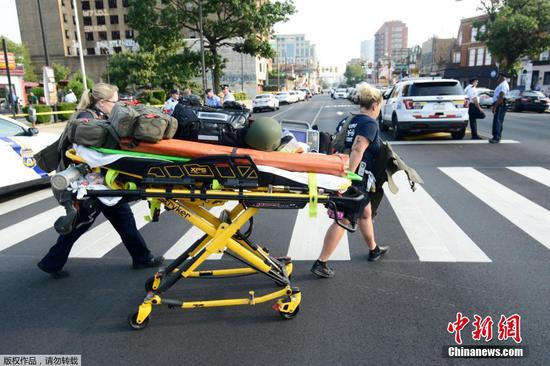 Paramedics roll a stretcher near the scene of a shooting incident in which several police were injured in Philadelphia, Pennsylvania, U.S. Aug. 14, 2019. (Photo/Agencies)

At least six police officers were wounded in a shooting Wednesday afternoon in the U.S. city of Philadelphia, according to local officials, but none are believed to have life-threatening injuries.

Local TV channel WPVI quoted John McNesby, president of the city's Fraternal Order of Police, as saying that six police officers have been wounded and are receiving treatment in a local hospital.

The shooting took place in the Nicetown-Tioga area of the city, along the 3700 block of North 15th Street. Aerial pictures of the scene showed dozens of police at the residential neighborhood, with heavy equipment being brought to the site.

A female eye witness told WPVI at least one hundred shots were heard.

As the event is unfolding, the number of people injured may continue to increase.

By early August, the city of Philadelphia had registered six mass shootings, resulting in two deaths and 30 injuries.