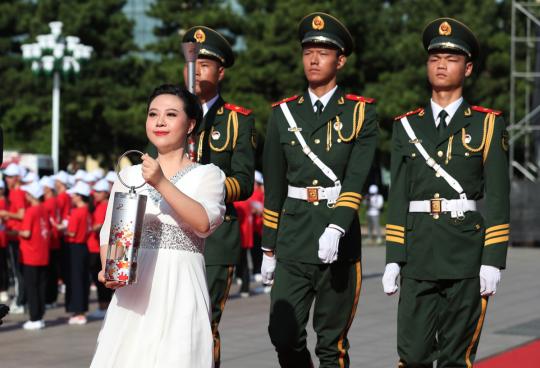 The flame was lit at a ceremony on Thursday morning in front of a sculpture of Communist Party of China revolutionaries inside the Nanchang August 1st Memorial Hall.

Fang Minglu, the great-granddaughter of Fang Zhimin, a revolutionary martyr, lit the torch with a concave mirror using the sun's rays. Later, she passed the flame to a PLA soldier who transferred it to a carrier.

The torch relay then reached Bayi Square where Yang Jian, director of the executive commission of the 7th Games, passed the torch to Dorah Mamby Koita, the International Military Sports Council's secretary-general, who in turn handed it over to Liu Qi, Party secretary of Jiangxi province. Liu then handed the torch to Olympic diver Peng Bo and 2,019 doves were released into the sky.

The torch is 70 centimeters long and weighs 780 grams.

Twenty torchbearers participated in the relay at the ceremony, many of them having served in the army and winning military honors including Qiu Eguo, a police officer; Xiao Qun, a medical worker awarded the United Nations Peacekeeping Medal, and Hu Minhua, recipient of the Florence Nightingale Medal. The last torchbearer was Wang Zhizhi, head coach of professional basketball team, the Bayi Rockets.

A total of 2,019 torchbearers, including 70 foreigners, will carry the torch in 27 cities and 16 military sites across the country from Thursday to Oct 18, when the 10-day 7th Games will begin in Wuhan, Hubei province.

Nearly 11,000 athletes from more than 100 International Military Sports Council member states have registered to take part in the games. Chinese participants will take part in all sports except golf. They are undertaking intensive training for the event, said the Chinese military.

The games are an important international sports event and Wuhan is committed to making them memorable, according to Hu Yabo, executive vice-mayor of Wuhan and deputy head of the games' executive commission.

All of the 35 venues for the games have either been built or refurbished in preparation for the event. Construction or refurbishment of venues took over two years to complete, Hu said, adding that they will be open to the public after the games.

He noted that accommodations and canteens in the Athletes' Village were completed and 98 hotels designated to host visitors and travelers had finished their preparations. The executive commission has recruited more than 240,000 volunteers to support event operations.