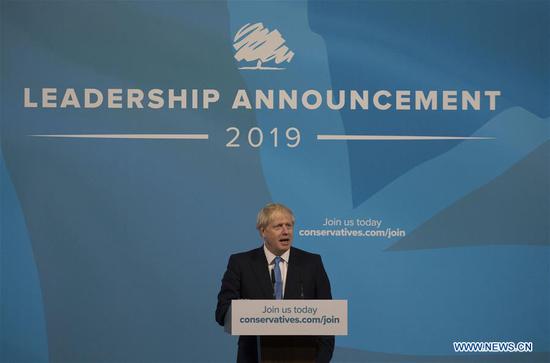 Former British Foreign Secretary and ex-mayor of London Boris Johnson was elected the leader of the ruling Conservative party on Tuesday and set to become the country's prime minister.

Johnson won 92,153 votes against the 46,656 received by his rival, Jeremy Hunt, the current foreign secretary.

Johnson said as PM he will bring "a new spirit of can-do" to the country.

"It's time to deliver Brexit, unite the country and defeat Jeremy Corbyn," he told audience after winning the leadership.

The Queen Elizabeth Center, just a few hundred meters from the Houses of Parliament was crowded with an audience who had been waiting to hear the name of Britain's incoming prime minister.

Johnson's brother and MP Jo Johnson sat alongside their sister Rachel and father Stanley Johnson to hear the announcement.

Outside the Houses of Parliament pro-leave and pro-EU supporters gathered, waving flags and shouting messages, as Brexit remains a hot topic across Britain.

Johnson had always been the favorite among the majority of the party's 160,000 members, but his victory is expected to lead to a string of front bench resignations.

Chancellor of the Exchequer Philip Hammond has already stated publicly he will quit, saying he cannot support the possibility of a no-deal Brexit.

Johnson has pledged to bring Britain out of the European Union (EU) by Oct. 31, with or without a deal.

The prospect of Britain leaving the bloc with no deal has already provoked talk of a rebellion among pro-Euro Conservative MPs.

The win on Tuesday comes four years after Johnson abandoned ambitions to join a leadership race following the resignation of the then prime minister David Cameron in the wake of the 2016 referendum result.

The announcement of the result Tuesday triggers a hand-over between Johnson and Theresa May, who succeeded Cameron in 2016.

In what will be 48 historic hours in British politics, May will make her last ever appearance Wednesday at Prime Minister's Question Time in the House of Commons. She is also expected to make a farewell speech.

Later Wednesday afternoon May will travel to Buckingham Palace to offer her resignation as prime minister to Queen Elizabeth. An hour later, Johnson will make the same journey to the palace to be appointed as prime minister by the British monarch. Both are part of a formal ceremonial ritual between crown and state.

Johnson will then head to his new home at 10 Downing Street where he will make his first public speech as prime minister in front of one of the world's most famous front doors.

Behind the closed door of No. 10, Johnson is immediately expected to start the task of assembling his new ministerial team, including appointing secretaries of state to the great offices of state, foreign secretary, home secretary and defense secretary. It is likely to take several days to complete his ministerial team.

May sent her congratulations to Johnson on her Twitter account, and said "we now need to work together to deliver a Brexit that works for the whole UK and to keep Jeremy Corbyn out of government."

She said Johnson will have her full support from the back benches.

Responding to the result, Labour leader Jeremy Corbyn said: "Boris Johnson has won the support of fewer than 100,000 unrepresentative Conservative Party members by promising tax cuts for the richest, presenting himself as the bankers' friend."

Corbyn added: "The people of our country should decide who becomes the prime minister in a General Election."

In Brussels, the EU's Brexit negotiator Michel Barnier said: "We look forward to working constructively with Boris Johnson when he takes office, to facilitate the ratification of the Withdrawal Agreement and achieve an orderly Brexit. We are ready also to rework the agreed Declaration on a new partnership in line with EU guidelines."

U.S. President Donald Trump also sent his congratulations to Johnson on his Twitter account, saying that "He will be great!" (Updated)