Shares soar as STAR board has stellar debut 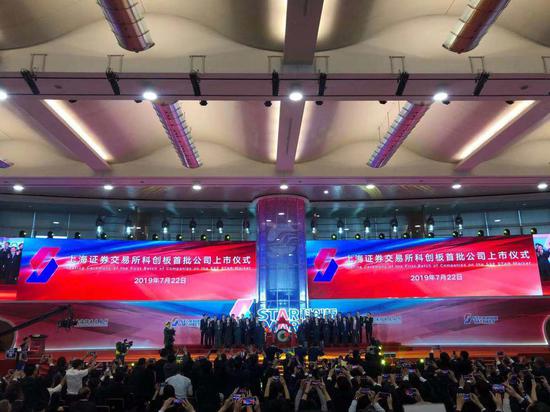 The listing ceremony of the first batch of companies on the SSE Star Market is held in Shanghai, July 22, 2019. (Photo by Shi Jing/chinadaily.com.cn)

China's science-technology innovation board, dubbed the STAR Market, opened at the Shanghai Stock Exchange on Monday, and officials and analysts said it will help support innovation-driven economic growth and capital market reform.

A series of new systemic arrangements have been introduced in the Nasdaq-style board, such as the registration-based initial public offering system, a wider daily price limit and strengthened information disclosure requirements.

The first 25 companies listed on the board made a strong debut, with an average daily increase of 140 percent, possibly because there is no price change limit for the first five trading days. At other A-share markets, there is a 10-percent daily price limit. Shanghai-based integrated circuit maker Anji Microelectronics reported the biggest daily jump of 400 percent to close at 196 yuan ($28.50) per share.

There are over 3 million individual investors qualified to invest in the new board while the number and scale of listed companies in the STAR Market is relatively small at present, leading to the first-day surge of prices, said Yang Delong, chief economist at Shen-zhen-based First Seafront Fund.

Trading rules set by the Shanghai exchange and the China Securities Regulatory Commission allow for a daily price fluctuation of 20 percent on the STAR Market after the first trading week. But Yang warned investors of the possibility of price drops on the board in the next few days.

Liu Zhongyuan, director of securities investment at the National Council for Social Security Fund, said at the listing ceremony on Monday that the fund will invest in the STAR Market by sticking to its long-term investment pattern, in hopes of supporting the development of technology startups and the real economy.

The new tech board, which was initiated in November, has realized the highest level of innovation in terms of systems and ideas under the current framework, said Fu Lichun, research director at Northeast Securities. With no existing model to refer to, efficiency in inaugurating the board is "stunning", he said.

Bob McCooey, chairman of Nasdaq Asia Pacific, wrote in a congratulatory letter that the STAR Market is at the forefront of defining the global financial industry.

"From market structure reforms to the introduction of this new listing venue — the progress demonstrates the growing ambition of the emerging technology companies and exciting opportunities for the investment community," he wrote.

Wang Jiyue, independent investment banking analyst, said that the STAR Market will become a testing field for the registration-based initial public offering system, which will help to improve the basic structure of China's capital market.

The regulatory commission said that the STAR Market should be a magnet for companies specializing in cutting-edge information technology, high-end equipment, new materials, new energy, energy saving and environmental protection, and biomedicine, based on the industries of the first listed companies.

Huang Hongyuan, chairman of the Shanghai exchange, said the new board will bridge technology and capital, strongly advancing the country's innovation-driven development.