Realty check: Leverage is under control(3) 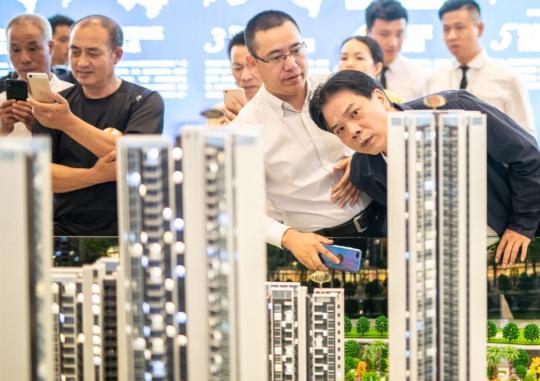 Potential homebuyers check out housing projects at a sales outlet in Dongguan, Guangdong province. (Photo by An Dong/For China Daily)

Moreover, market expectation of stable housing prices will help both curb further speculative borrowing and avoid widespread sluggish sales, Chen said. That's partly because of the regulatory principle that "houses are for living, not for speculation", initiated at the end of 2016.

During the first quarter of this year, outstanding yuan-denominated loans to the real estate market increased by 1.82 trillion yuan, accounting for 31.4 percent of the country's total increment of outstanding loans, down by 8.5 percentage points from the whole year of 2018, according to the PBOC.

New home prices in four first-tier cities edged up 0.2 percent from the previous month in June, and those in 31 second-tier cities also saw a growth of 0.8 percent, indicating the stability of property sales, according to the National Bureau of Statistics.

Financing costs of the majority of bonds issued by real estate enterprises in the first quarter were below 9 percent, indicating generally stable refinancing costs, especially for quality developers, Chen said. "The cost and difficulty of refinancing is the top focus for preventing default risks."

Despite the overall controllable risks, Pan underlined the need for monitoring and reining in speculative money flowing into the real estate sector via non-banking channels in the second half of the year.

"As regulations on bank loans tightened, some real estate enterprises resorted to other leveraging channels, such as trust companies that do not comply with related regulations."

During the January-June period, trust companies raised more than 360 billion yuan to invest in the real estate sector, nearly 40 percent of total funds raised by trust companies, according to data compiled by trust industry information provider Use.

Regulators have stepped up efforts to tackle potential speculative investment, with the CBIRC recently ordering trust companies whose investment in the real estate sector had expanded excessively and quickly to contain the speed and improve risk management.

"Other forms of illegal borrowing may emerge, so it is necessary to thoroughly investigate and supervise all kinds of leveraging tools of the real estate enterprises," Pan said.

Yan Yuejin, director of the Shanghai-based E-house China Research and Development Institution, called for mechanisms to detect if bank loans given to small businesses are somehow channeled into the property market.

Regulators are expected to continue to tighten the overall financing ecosystem of the real estate enterprises in the third quarter, but the policy stance may loosen a bit in the fourth quarter, Yan said.

Ren Xiaojin contributed to this story.