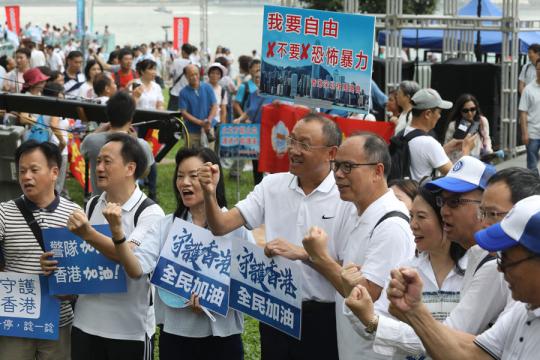 Residents attend the "Safeguard HK" assembly on Saturday at Admiralty to promote peace and protest the lawless tactics used in recent demonstrations in Hong Kong. (Photo by Calvin Ng/China Daily)

The recent wave of escalated, unprecedented violence by radical protesters in Hong Kong has driven more people to condemn their unlawful behavior and demand that law and order be speedily restored in the community.

The violent acts blatantly challenged the central government's authority and have crossed the "one country, two systems" bottom line, and must be dealt with zero tolerance, the spokesperson for the Hong Kong and Macao Affairs Office said.

On Saturday, hundreds of thousands of people from all walks of life turned up at a rally at Tamar Park in Admiralty to say no to violence and support the HKSAR's government and police. The crowd was almost twice as large as at a similar rally nearly three weeks ago.

An estimated 316,000 people defied rainy weather to express support and gratitude for the police in dealing with the protests against a now-suspended extradition bill and to appeal for peace and order.

The participants chanted slogans and waved signs and banners along with the national and HKSAR flags.

Almost none wore face masks or helmets, unlike the radical protesters who hid their identities.

The rally came in response to the growing trend of extreme violence by guerilla-style protesters - the latest example was on July 14 when hundreds of demonstrators, hurling bricks, bottles and umbrellas, clashed with police inside the New Town Plaza in Sha Tin.

Thirteen police officers were injured in that protest and taken to hospitals, and 47 protesters were arrested.

In Sunday's demonstration, a number of radical protesters splintered from the main crowd after a generally peaceful public procession on Hong Kong Island and targeted the Liaison Office of the Central People's Government in the HKSAR in Sai Wan.

In an organized move, masked protesters escalated violence by building makeshift roadblocks from metal barricades in front of the office. Some threw eggs at the office and sprayed oily paint on the CCTV cameras. Vandals painted offensive graffiti on the outer wall of the building. The National Emblem - five stars over Tian'anmen Gate - on the building facade was defaced with an unidentified black liquid.

In response, Vice-Chairman of the National Committee of the Chinese People's Political Consultative Conference Leung Chun-ying strongly condemned those who tarnished the emblem. Leung said on his social media account that they must be brought to justice.

In light of the escalating violence, the police started clearing the area around 8:30 pm, from the Western District toward the east. Protesters quickly dispersed as another crowd erecting barriers to besiege the Central Police District headquarters.

At the Tamar rally on Saturday, the atmosphere was peaceful, calm and rational. It began at 5 pm as prominent politicians, academics, celebrities and representatives of ethnic minority groups were invited onto the stage to share their thoughts and wishes for Hong Kong.

Tam Yiu-chung, a member of the National People's Congress Standing Committee, thanked the crowd for braving the inclement weather to show their solidarity in safeguarding the city.

"We must not tolerate any action that undermines Hong Kong and the principle of 'one country, two systems'," Tam said, drawing loud cheers from the crowd.

Economics professor Lui Tingming at Hong Kong University of Science and Technology received a roar of support when he urged the police to arrest and prosecute violent protesters who break the law.

"They're criminals," he said.

Allan Zeman, chairman of Lan Kwai Fong Holdings, said Saturday's rally could send a message to the world that Hong Kong people can end their differences and work together to resolve problems.

Wong Hei-yin, a trader, said Hong Kong people who believe in the power of cooperation built on mutual respect and tolerance should make themselves heard loud and clear in a peaceful and rational manner.

"We can't let violent protesters hijack public opinion, protesters who attack the government and undermine the rule of law while hiding their identities behind face masks and helmets," Wong said.

At the end of the rally, a group of youth representatives read a declaration appealing to the public never to resort to violence, to talk instead of to argue and to unite instead of to fight.