U.S. colleges pushing back on scrutiny of Chinese students 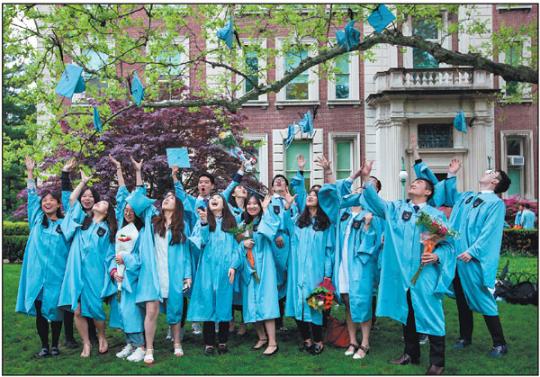 Acknowledging the importance of Chinese students and scholars on their campuses, universities and colleges in the United States are working hard to reassure Chinese students that they are welcome despite mixed signals from Washington that have raised concerns among current and prospective students.

"The messaging is not consistent across our government" on issues concerning Chinese students coming to study in the U.S., said Brad Farnsworth, vice-president of the American Council on Education's Center for Internationalization and Global Engagement.

U.S. President Donald Trump delivered a welcoming message during his June 29 meeting with President Xi Jinping when he said that there are many excellent students in China and that he always welcomes Chinese students to study in the U.S., Xinhua News Agency reported.

Before that, the rhetoric in Washington was mostly cautious toward Chinese students and scholars, especially in light of security concerns. There were even cases of scholars from China or with Chinese affiliations being dismissed from U.S. universities or research institutes.

Farnsworth also pointed out concerns over student visas for Chinese students, as lengthy delays are being seen in the approval process. This led to a warning from the Ministry of Education alerting Chinese applicants of the potentially prolonged visa approval process.

"I heard that many Chinese students were asked more questions when they came to the U.S. from China after Christmas," said Sherry Lin, who studies civil and urban engineering at New York University. "So, I didn't go back last winter, but instead, my parents came and visited me."

Some majors, namely those in high-tech fields, are affected more than others.

"My friend who is studying mechanical engineering waited for three months for his visa to be approved," said Cathy Tang, who graduated from University of California, Berkeley, two years ago as an economics major. "I, on the other hand, only waited for less than a week."

"If there is one thing that our government can do to make the U.S. more attractive to Chinese students, it's to improve the process of visa approvals. It is something that is taking a long time," said Farnsworth, who added that he is still concerned about the impact recent policies and rhetoric might have on Chinese students, despite Trump's recent welcoming message.

She said her major concern was that the increasing restrictions on Chinese students will affect her applications to PhD programs and her future studies in the U.S.

The possibility of losing those prospective Chinese students is what Farnsworth worries about as he just returned from a visit to China where he heard from people there.

"It's very important to send the wide message" to potential Chinese students that they are welcome in the U.S., he said, adding that they do have other options.

"They can go to the UK, Canada or Australia - and so I came away from my trip to China being even more concerned about the attractiveness of the U.S. relative to other countries," said Farnsworth.

In the past decade, many U.S. universities and colleges have turned to students from abroad to make up for rising costs and shrinking funds. There were about 1.1 million international students studying in the U.S. in the 2017-18 school year, according to the Institute of International Education, and among them were more than 360,000 Chinese.

More than 80 percent of U.S. schools surveyed by the Institute of International Education said the delays and denials of international student visas under the Trump administration's scrutiny have had a negative impact on their ability to enroll non-U.S. students, Bloomberg reported.

Enrollment was generally flat over the past two years, and the Chinese student population saw the smallest gain in a decade, the Institute of International Education said.

The relationship between China and the U.S. is "maybe the single most important bilateral relationship in higher education in our country", said Farnsworth. "Obviously we are very happy to have one-third of all our international students come from China. They are an important source of revenue, but I think it's important to emphasize that they also provide other major benefits to institutions," he said.

Chinese students add to the cultural diversity of U.S. institutions and create learning experiences for their U.S. classmates and professors. The research collaboration and academic partnerships between the U.S. and China are also important to U.S. universities.

The issue was recently addressed by leading U.S. universities.

The presidents of Yale and the Massachusetts Institute of Technology and the chancellor of University of California, Berkeley, each sent out a campuswide email highlighting the significance of the Chinese community to their schools.

Chinese and Chinese American researchers are not only "exemplary members of our community but exceptional contributors to American society", MIT President L. Rafael Reif wrote in a letter.

"We believe that having a global student population is a foundational element of our institutional character and academic mission," Dan Mogulof, Berkeley assistant vice-chancellor, told China Daily. "So, in that context, we will continue to ensure that every student on this campus, regardless of their country of origin, feels safe, respected and welcome."