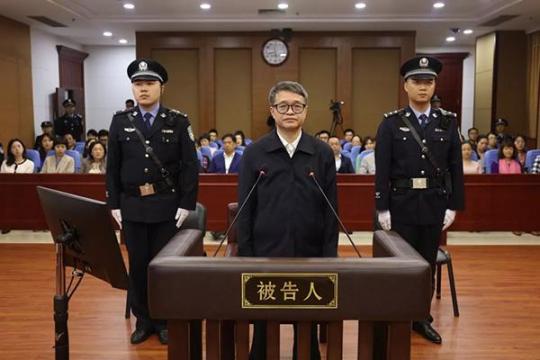 According to the Intermediate People's Court of Fuzhou in Fujian province, from 2004 to 2017 Zeng took advantage of his positions as deputy director and director of the Guangdong Financial Bureau to help companies and individuals obtain land for development and construction projects.

In return, he accepted huge bribes.

He was given a lenient punishment after confessing his crimes and returning his illicit gains, the court said in the statement.

Zeng, a native of Guangdong, was born in 1963. He was appointed deputy director of the Guangdong Financial Bureau in 2003 and stepped up to the position of director in 2010.

In 2018, he took over as the head of the Guangdong Provincial United Front Work Department.

In July 2018, Zeng became the target of an investigation by the Communist Party of China Central Commission for Discipline Inspection and National Supervisory Commission for "suspected serious violations of Party disciplinary rules and law". He was expelled from the CPC and removed from public office in January.

The probe found that "Zeng violated organizational discipline, refused to tell the truth when responding to the supervisor's inquiry, sought benefits for others and accepted money in official selection and appointment".

Other offenses included seeking benefits for relatives in business operations, engaging in business operations and accepting gifts and money, and making decisions in violation of regulations, the statement said. Zeng took advantage of his posts to aid others, and he is suspected of the crime of taking bribes, it said.

Zeng pleaded guilty in April's hearing and said he would not appeal.