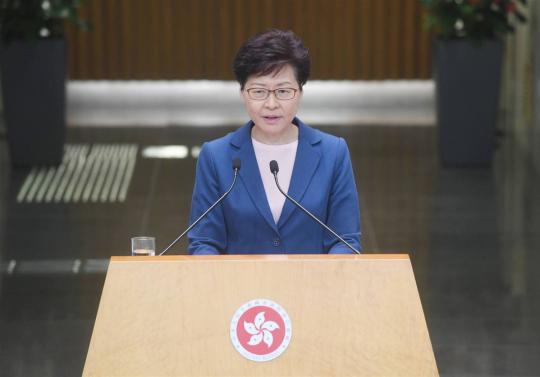 Carrie Lam Cheng Yuet-ngor, chief executive of the Hong Kong Special Administrative Region, vowed on Tuesday that her government would reform its governance style to ensure different voices are heard and addressed.

The pledge was made after Lam confirmed that an unpopular extradition amendment proposal that has been the subject of controversy is "dead", without any plan to restart it, and attributed the government's "complete failure" to amend the city's extradition law to her administration's deficiency in gauging public sentiment.

Speaking before a weekly meeting with her policy advisers at the Executive Council, the Hong Kong leader said her administration will continue to serve the city, and she expressed hope that the community will give her and her team a chance to mend the rift and take the city forward through "a new governance style".

To better address different views from people of various backgrounds in the community, Lam said the government will reform the existing consultative machinery and build a more open platform to facilitate dialogue with people from diverse backgrounds.

Lam herself will take the first step in this endeavor, saying she is ready to conduct open dialogues with university students. But she said she hoped the communication would take place without any prerequisites.

Other measures include a major change in the constitution and operation of the Youth Development Commission, an advisory body to the government on youth work, headed by Chief Secretary for Administration Matthew Cheung Kin-chung with some 40 members from various sectors in the city, Lam said.

Lam also said she has asked principal government officials to review any potentially controversial policies to see whether more public consultation is needed.

From her administration team to the Executive Council, Lam pledged that a more down-to-earth approach will be taken to better grasp public opinion and concerns.

Lam's remarks came after a series of large protests against the government's proposed extradition bill, with some having turned into violent clashes with the police and, in one case, the vandalizing of the SAR's legislature chambers.

"Saddened and shocked" by the unrest, Lam called on people with different views to express themselves in a peaceful and orderly manner.

She stressed that granting amnesty to people arrested during the protests, as some have requested, would be against the rule of law in Hong Kong and would deviate from the Basic Law, which stipulates that prosecutorial decisions of the Department of Justice must be free from any interference.

Dozens of protestors have been arrested since mid-June on charges including unlawful assembly, assaulting a police officer and in crimes related to rioting.

Ip Kwok-him, member of the Executive Council, affirmed Lam's pledge to listen to more diverse voices, saying it will ensure better governance and help eliminate misunderstanding and defuse conflict in the community.

He said he thought it will help the government to better address young people's concerns.