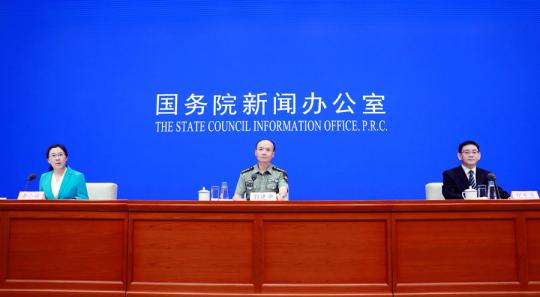 A news conference on the preparatory work for the 7th International Military Sports Council Military World Games is held in Beijing, July 9, 2019. (Photo/Xinhua)

The games will be held in Wuhan, Hubei province, between Oct 18 and 27. A total of 10,719 athletes from 105 CISM member states have registered to take part in the games.

Hu Yabo, executive vice-mayor of Wuhan and deputy head of the Executive Commission of the 7th CISM Military World Games, said at a news conference in Beijing that the games are an important international sports event and Wuhan is committed to making them memorable.

"We have been sparing no effort in the preparatory work for the games and have made noticeable progress," he said.

All of the 35 venues for the games have either been built or refurbished in preparation for the event. Construction or refurbishment of venues took only two years and three months to complete, Hu said, adding that they will be open to the public after the games.

Thirty-eight test events covering 27 sports have been conducted or are underway in Wuhan, and competition management committees have been actively getting ready for the games, according to the vice-mayor.

He added that accommodation and canteens in the Athletes' Village were completed and 98 hotels designated to host visitors and travelers had finished their preparations. The executive commission has recruited more than 240,000 volunteers to support event operations.

Organizers are pushing ahead with rehearsal performances for the opening and closing ceremonies of the games.

A torch will be lit on Aug 1 in Nanchang, Jiangxi province, where the People's Liberation Army was established. It will then be carried in a relay across 27 cities and 16 military sites, Hu said.

Hu also said that most of the tickets for the games will be low priced to benefit the public.

Senior Colonel Guo Jianzhong from the Central Military Commission's Training Management Department, also a deputy head of the games' executive commission, said at the news conference that Chinese participants will take part in all sports except golf.

He said Chinese athletes are racing against time to prepare themselves for the coming games, and they cherish the opportunity to communicate and compete with their foreign peers.