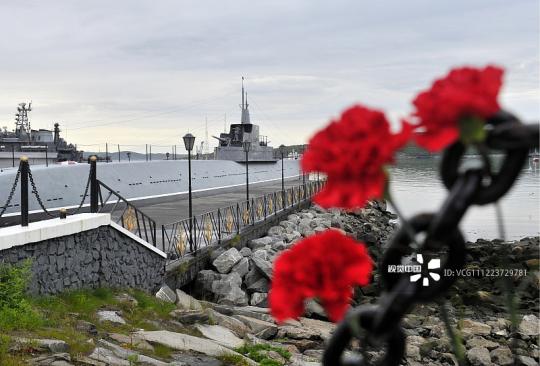 Flowers left by mourners in the port of Severomorsk in memory of 14 Russian Navy officers who died in a fire on a submersible in Russian waters on Monday. （Photo/Agencies）

Fourteen Russian seamen were killed in a fire that broke out on one of the navy's deep-sea research submersibles, Russia's Defense Ministry said on Tuesday.

The ministry didn't disclose the number of sailors on board, nor did it clarify whether there were any survivors in the Monday fire in the country's most secret submersible designed for sensitive missions at great depths. Russian media revealed it was an AS-12 nuclear-powered sub, known by the nickname "Losharik". However, there has been no official confirmation, BBC News reported.

The submarine, which entered service in 2010, is the most advanced and most obscure Russian submersible. It is carried under the hull of a mother submarine, the nuclear-powered Orenburg.

Some observers speculated the Losharik was capable of going as deep as 19,685 feet (6,000 meters), but the claim couldn't be independently confirmed.

The fire was put out and the vessel returned to a military base in the northern city of Severomorsk, located on the Kola Peninsula above the Arctic Circle. Military investigators have launched a probe into the accident.

Russian President Vladimir Putin has instructed Defense Minister Sergei Shoigu to fly to Severomorsk to ensure a thorough investigation into the reasons behind the fire.

"Fourteen submariners have died of poisoning by fumes from the fire," Shoigu reported to Putin during a televised meeting. "The fire was extinguished, thanks to the crew's resolute action."

"It is a big loss for the navy, and for the army as a whole," Putin said of the accident, which has echoes of the sinking of the Kursk submarine in 2000 that claimed the lives of 118 personnel.

"It is not an ordinary vessel, as we know, it's a scientific research vessel. Its crew is highly professional," Putin said.

Putin offered his deep condolences to the families of the sailors killed in the fire and ordered to provide any assistance possible to them.

He stressed that the tragedy had occurred on board an uncommon research vessel. "The crews were top professionals. According to your early reports, seven of the 14 died were captains, and two heroes of Russia," Putin said. "This is a big loss for the fleet, for the army in general."