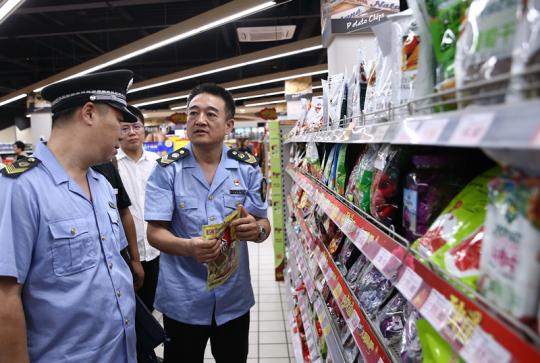 One year after creating the food safety lock, which has become popular nationwide, the Xuhui district Market Regulation Administration in Shanghai recently introduced guidelines on its use and manufacture.

Similar to a luggage tag and secured around a carrying bag, it has to be broken to be unlocked. The disposable lock is intended to guarantee that food is not tampered with during delivery from the restaurant to the customer.

"It's like putting a safety belt on the meal box," said Zhai Hengyao, an official with the district administration.

"But the problem is that the safety belt has been so popular that we have seen an increasing number of food business operators improvising with their own versions. So we think it's time to introduce guidelines and eliminate confusion."

After the administration introduced the food safety lock last June, with 50,000 free samples distributed to restaurants in its region, food delivery giant Meituan adopted it and has since had millions of its orders "locked" with the device.

The new guidelines require the locks to be made from recyclable plastic complying with the country's food safety regulations. They also suggest the locks be waterproof and be opened with an amount of force equivalent to that needed to unscrew a plastic water bottle cap, Zhai said.

The administration also said a recent internet market regulation proposal by eight central government departments, including the State Administration for Market Regulation and the Ministry of Industry and Information Technology, should be followed.

It calls for further regulation of the food delivery business and encourages the use of safety seals or locks.

"The whole nation has been investing so much to guarantee food safety from farms, to factories, to restaurants. Now it is important that the fruit of so much effort remains intact during the last kilometer to consumers' dining tables," Zhai said.

Tao Leijun, head of Shanghai-based Meituan delivery business, said "the lock can protect the rights of both consumers and delivery guys".

The company says consumers who find locks have been tampered with can reject orders.

Aside from the locks, the company has also given away 78 million pieces of tape to more than 1,000 companies.

As China's food delivery service increases in popularity, conflicts between consumers and deliverymen are rising.

In 2017, a deliveryman in Guangdong province was caught on a security camera in an elevator taking bites from a meal then spitting them back into the delivery box. He handed the meal to the customer as if nothing had happened.