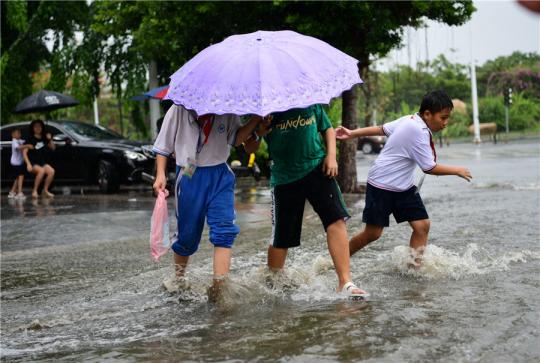 Mun batters island with wind gusts and rain, including 255 mm in Haiwei

The first of the typhoon season, Mun hit Hele town, Wanning city, on the eastern coast at 12:45 am on Wednesday, with wind gusts of 65 kilometers per hour.

The storm dumped more than 100 millimeters of rain on 42 townships and districts and on 12 cities and counties in Hainan. Haiwei town in Changjiang county was inundated by 255 mm, according to the Hainan Meteorological Center.

Shipping on the Qiongzhou Strait, the channel between Hainan and the mainland, has been halted since noon on Tuesday.

Officials with the provincial authorities said all fishing boats had returned in advance to be sheltered from the storms. No casualties have been reported.

Mun continued to bring strong storms to Hainan Island and its offshore areas on Wednesday. Authorities issued orange rainstorm warnings - the second most severe in a four-tier system - to several cities and counties.

Mun moved northwest at a speed of about 15 km/h with little change in intensity. It crossed Hainan Island on Wednesday afternoon, then entered the Beibu Gulf and moved on to northern Vietnam, according to the local observatory.

As it is the peak tourism season in Hainan, local authorities have warned tourists to heed the latest forecasts and warnings and to be aware of personal safety at scenic spots.

Authorities said the impact of Mun will help cool the high temperatures of recent days, and the rainfall will replenish water in some reservoirs, ease local drought conditions and help crop growth.

The National Meteorological Center forecast that from Wednesday to Thursday, Mun would dump between 50 to 90 mm of rain and bring strong winds to other areas including the Guangxi Zhuang autonomous region and Guangdong, Hunan and Fujian provinces.

China's National Climate Center predicts there will be typhoon activity from midsummer to early autumn, with the most expected in the fall. Compared to the past, their landfall and impact routes will be more westward and their intensity stronger. The south and southeast coastal areas need to take special precautions against typhoons, floods, gales and storm surges, the center warned.