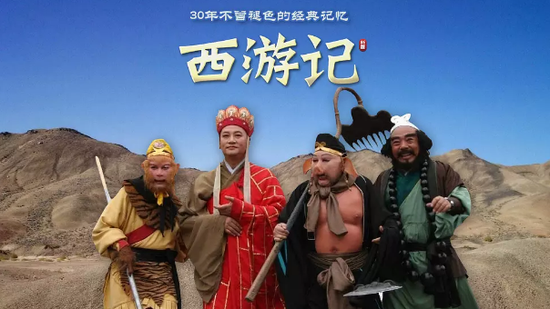 A poster of the TV series "Journey to the West" /Photo via Douban.com

Thirty-seven years after opening day for shooting, the literary script of TV series "Journey to the West" is about to be released, Wang Chongqiu, the photographer of the TV classic announced on social media Wednesday.

"On the date today in 1982, the trailer episode for 'Journey to the West' started its shooting in Yangzhou. Many scenes on that day are still fresh in my mind now, but actually in a second, 37 years have passed," Wang wrote.

The photographer also pointed out there were many differences between the TV drama and the literary script, in terms of plot details, characters, and languages. "From the original literary script to the storyboard, and the final presentation on screen, it's in the process of countless adjustments and revisions, that the infinite pursuit for excellence was shown," Wang said.

The literary script of "Journey to the West" has been published once in 2002, compiled in "Liya Drama Collection," a four-volume literary work consisting of several major pieces by the drama's screenwriter duo Dai Yinglu and Zou Yiqing.

However, as years passed by and due to lack of promotion, very few people know about the work. This is also the first time for the literary script to be published independently.

Adapted from Wu Cheng' en's novel with the same name in Ming Dynasty, the drama tells the story of Tang Sanzang, the monk master, and his three disciples, Sun Wukong (the Monkey King), Zhu Bajie (the pig), and Sha Wujing (a river demon), went on a long and difficult journey to the West for Buddhist sacred scriptures.

An unsurpassed legend in China

Produced by China Central Television (CCTV), the TV series "Journey to the West" started its shooting in 1982, and the first 11 episodes met the audience in 1986 during Spring Festival. Since then, it has won critical acclaim from people of all ages, and soon gained popularity across China. It created an audience rating miracle of 89.4 percent and was rebroadcasted for more than 3,000 times by various local television channels in the following decades.

In 2000, the "Sequel to Journey to the West" was aired on CCTV-1. The Sequel, produced by the same crew and cast during 1998 and 1999, made up the stories the first one didn't cover, with more splendid fighting scenes and richer inner activities of the characters.

Regarded as an unsurpassed classic, "Journey to the West" (including the Sequal) is also one of the most-frequently aired TV series during summer vacation, together with "My Fair Princess," "Empresses in the Palace," and more.

As July comes, the summer holiday begins this year. If you're interested in this legendary TV drama, don't miss it!

Shot in an age when the production budget was tight, props and costumes were simple, and special effect technology was not so advanced, the drama went through many hardships before it was aired. There're also many behind-the-scenes fun facts during the shooting process.

1.       The drama was shot by only one photographer Wang Chongqiu, with only one camera.

2.       The whole 25 episodes took six years to make. To make the setting closer to the original novel, the crew went to 26 provinces in China.

3.       Tang Sanzang, the master of the three disciples in the story, was played by three actors: Wang Yue, Xu Shaohua, and Chi Zhongrui.

4.       The actor who played Sha Wujing, the last monk joined the team to the West, also played about 10 other characters in the drama, varying from god, demon, to courtier.

5.       In the shooting time when people were conservative, the actresses who played Spider Demons protested about the revealing costumes but failed. They cried, felt miserable, and used gauze kerchief to hide some part of the body when they started shooting.

6.       At first, the crew couldn't find a white horse, so they used a black horse instead, and painted the horse white. But when the horse passed through a river, the original color was revealed while the river was dyed white.

8.       Due to the lack of stunt experience, the crew went to study the skill for hanging WIA in Hong Kong.

9.       To present the clouds and mists in heaven in the story, the crew used a large amount of dry ice. A worker once blacked out because he tried to hide from the camera and bowed low into the thick carbon dioxide.

10.   The fairy peaches in the story "Havoc in Heaven," were all hand-made properties. The propsmen used thin bamboo stripes and iron wires for the outline, and thick paper stuck to them as the surface. When the "Monkey King" needed to eat the peach, they put a real peach inside the property which could be featured through a hole.