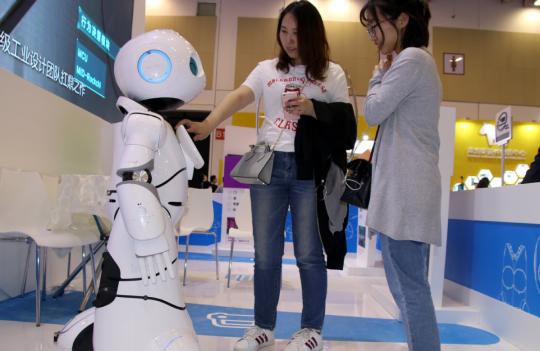 Vistors interact with a robot at the 2018 AI products expo in Suzhou, Jiangsu province on May 10, 2018. (Photo by Wang Jiankang/for China Daily)

China has published the most research papers on artificial intelligence around the world, while AI research from the United States remains the most influential, said a report on AI development released in Shanghai on Friday.

More than 300,000 papers on AI have been published globally from 2013 to 2018, among which around 74,000 were published by Chinese researchers and 52,000 by their U.S. counterparts, and the U.S. dominated in fields such as citation impact, number of patents, and the scale of companies and funds, the report said, adding that China lacks basic theoretical research.

The report was compiled by the Research Center for AI Development, which was established last year by the Ministry of Science and Technology.

"China and the United States are the two main pillars of the world's AI research network, and the most cooperation on AI research happened between the two nations－the link between them is the strongest," said Li Xiuquan, deputy director of the center. "But more and more countries have realized the importance of AI, and paid a lot of attention to this area."

The report pointed out that the weakness of AI research in China lies in the insufficient collaboration between universities and industries, while Israel and the U.S. are ahead in this respect.

"AI research in China is largely limited within universities, resulting in a low rate of technology transfer from research to commercial products," Li said.

"And plans to build data infrastructure, such as cloud computing and data centers, have been made in the integrated development of the region."

The report also surveyed AI education in China, which has started at all levels. More than 30 universities have opened schools on AI, and 75 established AI majors or interdisciplinary majors with AI.

China's first high school textbook on AI was published by East China Normal University last year, and 40 high schools nationwide have participated in a pilot program on teaching AI to their students.

The release of the report was part of the Pujiang Innovation Forum, a major annual event in Shanghai for exchanges on science and technology innovation between China and the rest of the world. Nearly 150 guest speakers from 23 countries and regions will make speeches at 16 different forums through Sunday at this year's event.