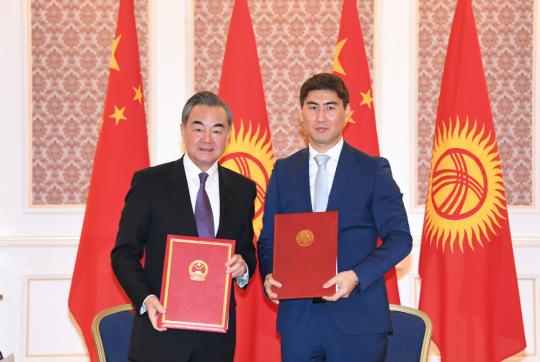 State Councilor and Foreign Minister Wang Yi underlined the need for cooperation between China and Kyrgyzstan on the eradication of terrorism and extremism, saying preventive measures taken by the Xinjiang Uygur autonomous region to combat the evil forces have achieved results.

Wang made the remarks at a joint news conference with Kyrgyz Foreign Minister Chyngyz Aidarbekov in Bishkek, capital of Kyrgyzstan, during his visit to the Central Asian nation on Tuesday.

Saying Xinjiang has been seriously affected by the three evil forces of terrorism, extremism and separatism, Wang stated terrorist forces and extremist ideology have posed threats to security in China and Kyrgyzstan as well as the region at large.

He said the preventive measures that have been taken to combat terrorism and extremism in Xinjiang not only help safeguard its own security and stability, but are also conducive to regional peace and security.

Noting the measures have made positive contributions to international counterterrorism, he said they have also become helpful in effectively rooting out extremism.

China highly appreciates Kyrgyzstan's full support of its policy toward Xinjiang, Wang said, adding that this demonstrates the fine tradition of the two countries featuring mutual respect and support.

The two nations will further intensify their cooperation in fighting terror, cross-border organized crime and drug trafficking, and they will also boost coordination in cyber security, he said.

Kyrgyzstan assumes the rotating presidency of the Shanghai Cooperation Organization this year. It will host the SCO summit in Bishkek next month.

In a meeting with Kyrgyz President Sooronbay Jeenbekov on Tuesday, Wang said China is willing to strengthen pragmatic cooperation with Kyrgyzstan in trade, agriculture and infrastructure connectivity under the framework of the Belt and Road Initiative.

Jeenbekov hailed China as a good neighbor, friend and partner of Kyrgyzstan, and said his country is ready to align its development strategy with the BRI. He added that Kyrgyzstan firmly pursues the one-China policy and supports the anti-terrorist measures China has taken in Xinjiang.

He is looking forward to President Xi Jinping's attendance of the SCO Bishkek Summit as well as his state visit to Kyrgyzstan in June, Jeenbekov said.