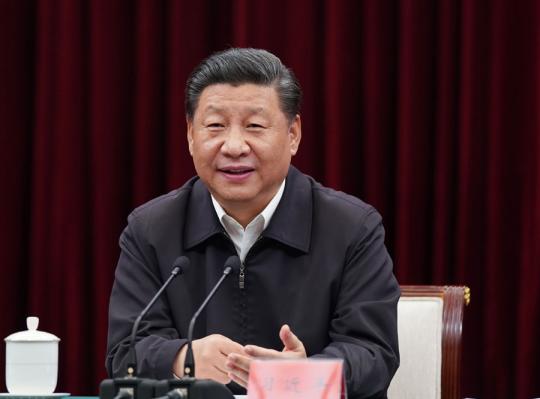 President Xi Jinping chairs a meeting in Nanchang, Jiangxi province, on Tuesday about advancing the development of the central region. (Photo/Xinhua)

President Xi Jinping stressed the significance of owning independent intellectual property rights and core technology while visiting a producer of rare earth, which he hailed as an "important strategic resource", in Gan-zhou, Jiangxi Province, on Monday.

Xi, also general secretary of the Communist Party of China Central Committee and chairman of the Central Military Commission, visited the JL MAG Rare-Earth Co immediately after he arrived in Jiangxi for the three-day inspection tour.

At the company, Xi learned about its production and operation, the rare earth industry's development in Ganzhou, the development and application of the country's rare earth resources, and the environmental protection measures the company takes in production.

Only when a company has independent intellectual property rights and core technology will it make competitive products and succeed amid fierce competition, Xi said.

Rare earth is a non-renewable important strategic resource, Xi said, adding that more efforts are needed to upgrade the technology for its exploitation and application, increase its added value, and protect the environment, to achieve green and sustainable development.

At a meeting held in Nanchang, capital of Jiangxi, on Tuesday afternoon, Xi called for efforts to make new advances in the development of the country's central region. Xi presided over the meeting, at which he was briefed by the Party secretaries of Shanxi, Anhui, Jiangxi, Henan, Hubei and Hunan provinces, as well as He Lifeng, head of the National Development and Reform Commission.

Promoting the rise of the central region is an important strategic decision made by the CPC Central Committee, Xi said, adding that it has great significance in achieving the goal of building a moderately prosperous society in all respects.

Xi said that although China is still in an important period of strategic opportunity for its development, the country faces an increasingly complicated international situation.

He cautioned that the government should have a clear outlook on the long-term and complex characteristics of all unfavorable factors both at home and abroad, and should prepare for all possible difficulties.

The most important thing for China is to focus on its own issues, Xi said, adding that joint efforts are needed to push forward reform and development.

Xi required governments in the central region to promote the high-quality development of the manufacturing sector and speed up the application of digital, internet and intelligent technologies in all areas.

More efforts are needed to promote independent innovation capabilities in key areas, speed up developing core technologies with independent intellectual property rights, encourage the innovation of original technologies, and enhance intellectual property right protection, Xi said. He called on the governments to build a stable, fair and transparent business environment, and to help private enterprises and small and medium-sized companies to address their difficulties in finance.

Governments in the central region should attract advanced manufacturing enterprises moved from the coastal region, take part in Belt and Road international cooperation, enhance the protection of the environment, create more jobs for poverty reduction and make relevant policies to support the rise of the central region, Xi said.