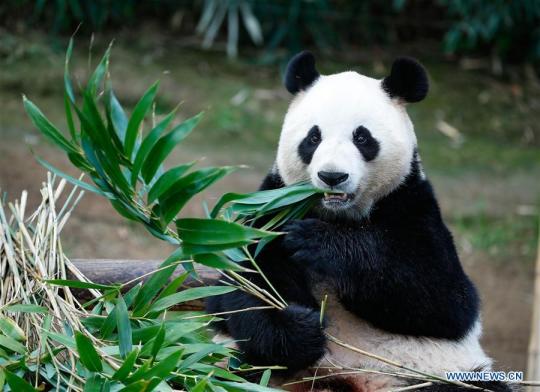 Having trouble telling one giant panda from another?

A facial recognition app developed by the Chengdu Research Base of Giant Panda Breeding with researchers from Singapore's Nanyang Technological University and Sichuan Normal University will make identifying the bears easier.

Wan Yongqing, a Beijing photographer, visits Sichuan province every other year to take photos of pandas. He has watched them for more than a decade at the Chengdu facility and other sites associated with the China Conservation and Research Center for the Giant Panda in Sichuan.

"Friends call me a die-hard panda fan. It is a shame I find all pandas look the same, with black eyes and white fur. It does not matter as all the bears are cute to me," he said.

But discerning one bear from another does matter to researchers, according to Zhang Zhihe, chief of the Chengdu base.

Identifying individual bears is important for their conservation management and research.

For captive pandas, it is key to their daily feeding schedules, genealogy and archival management. For wild pandas, it helps researchers study their population structure and provides scientific support for their protection and management, he said.

China has carried out four scientific surveys on wild pandas, obtaining a large volume of valuable data about the animals. The number of wild pandas in China has been basically ascertained. However, it is still difficult to clarify their population distribution, age, gender, health and other information.

It is difficult to track and monitor the structure because of wild pandas' solitary living habits in deep mountains and their vast geographical habitat, Zhang added.

In 2017, the Chengdu base together with its two partner facilities began researching individual panda identification technology by analyzing images. Over the past two years, they have built a database of more than 120,000 images and over 10,000 video clips, and completed cataloging of nearly 10,000 images.

Using the databank, researchers have launched a facial recognition app which can accurately recognize captive pandas by analyzing and comparing the unique features of panda faces with database analysis.

Panda researchers hope algorithms and AI technology will help them analyze data for both captive and wild pandas.

But 24 of the 33 groups of wild pandas found in the fourth census are endangered, with some groups having fewer than 30 pandas. Eighteen groups have fewer than 10 pandas each, said Zhang Hemin, deputy director of the China Conservation and Research Center for the Giant Panda.