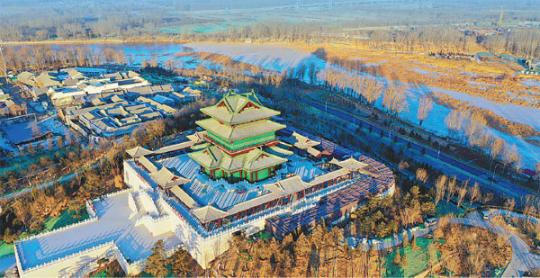 The Yongning Pavilion built in an ancient Chinese architectural style provides a panoramic view of the expo site in Beijing. (Provided to China Daily）

The Beijing International Horticultural Exhibition, which is scheduled to open in the city's Yan-qing district on April 29, is expected to showcase the diverse gardening cultures from China and around the world, organizers said.

With the theme of "live green, live better", the expo organizers and architects expressed their beliefs in a green lifestyle through the design of the gardens and pavilions, according to officials.

The China Pavilion, which covers 15,000 square meters, is a landmark at the expo. With its design inspired from the traditional jade ornament ruyi, the pavilion will feature a display of age-old Chinese culture. It aims to appeal to visitors with the charms of Chinese horticulture and the achievements made by the nation's provinces and by research institutions in the industry.

During the exhibition, visitors will be able to chew over the traditional Chinese norms including "the harmony between human and nature" through the well-presented horticultural work carried out by Chinese craftsmen.

They will also get to learn about the ecosystem comprising water, forests, fields, lakes and grass via digital images. Visitors can admire miniature Chinese landscapes in the form of exquisite flower-embossing and flower-arranging.

Apart from the general exhibitions at the China Pavilion, 31 provinces from across the Chinese mainland, as well as China's Hong Kong, Macao and Taiwan, will showcase their horticulture in individual outdoor parks.

The arrangement demonstrates the goal of building Beijing into a world-class livable city and adhering to the people-oriented development plan.

The Yunnan Garden will replicate the rivers and mountains in the province to showcase the ethnic diversity, biodiversity and achievements in preserving the local ecosystem.

For Zhejiang province, its garden design revolves around the theme of integrating nature with horticulture. The park displays varieties of plants, new technologies and products emerging in the local horticultural industry.

Guangdong province will make an effort to present the essence of a Lingnan water town, arranging the traditional corridors, bridges and foyers designed in a harmonious pattern based on the shape of a river flow.

Besides the domestic exhibitions, the Plant Pavilion, one of the major stands at the expo, will house thousands of plant species. It will include more than 100 rare species and showcase beautiful plants from across the globe.

In the German park, a wall of moss will act as a natural air purifier and will represent a practical demonstration of an indoor garden.

The Russian park will exhibit more than 90 kinds of plants, including blackcurrant, wild rose and sea-buckthorn. In another exhibition hall, a house built with bamboo and rattan is expected to be popular with visitors.

Chen Zhou, vice-president of the China Council for the Promotion of International Trade, said the expo will be an event featuring "multiple large-scale activities and a flair for innovation". Chen is also on the organizing committee of the expo.

The 162-day event has an unprecedented scale and number of exhibitors compared to previous sessions. It has been confirmed that it will be attended by more than 110 countries and international organizations, Chen said.