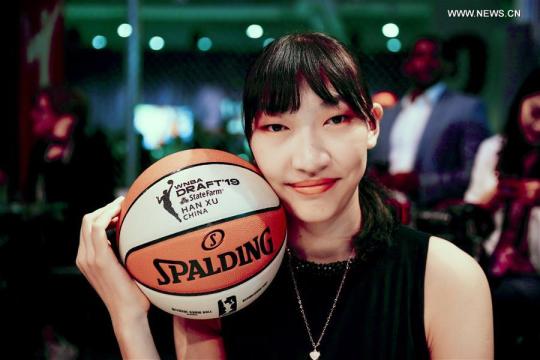 Han Xu of China poses for a photo with a basketball before the WNBA women's basketball draft in New York, the United States, April 10, 2019. (Xinhua/Wang Ying)

Chinese centers Han Xu and Li Yueru, both 19, joined WNBA on Wednesday, becoming the second and third player from China drafted directly to the top-level women's basketball league in the world.

Zheng Haixia, former elite center of China, had been selected by the Los Angeles Sparks in the second round (16th overall) in the inaugural WNBA draft on February 27, 1997. However, Zheng played only one season for the Sparks and retired in 1998 due to injuries.

Han, 2.07m, was chosen by the New York Liberty in the second round, the 14th pick overall.

Li was selected by the Atlanta Dream in the third round, the 35th overall, about one hour after Han's success.

Both Han and Li were among the 53 draftees in the pool. The draft was divided into three rounds with each of the 12 WNBA sides picking one player each round.

Han told Xinhua on scene, "I cannot help crying because my parents on site let me watch a video message sent by coach Xu (the Chinese national team coach). It brings back the memory of hardship on the road to WNBA."

Graduated from the well-known middle school attached to Tsinghua University in 2017, Han turned into a professional player and joined Xinjiang to compete in WCBA in 2018. Averaging 15.9 points and 8.9 rebounds, Han roared into the WCBA All-Star starting lineup and the Chinese national team.

Then she set a target of going to WNBA in three years. In the 2018 FIBA Women's World Cup in Spain, Han made 20 points in China's encounter with the United States in the group stage, when China lost with a 12-point margin, the smallest in more than 30 years. Her fast pace, accurate shooting and ability of reading the match stunned the opponents.

"I did not assume that I could join WNBA in such short time. I must thank my parents, coach Xu, my teammates in all the teams I have ever served for their great help," Han said.

Han's father was a professional basketball player and her mother was an amateur. Han said, "I have played basketball for 10 years. When I was young, I was taller than others and I thought I must have something to do with basketball this life."

Talking about the draft, Han said,"I don't care about being picked in the first, second or third round. The most important thing is I have come to WNBA and I'll try my best here."

As for New York Liberty, Han said, "My acquaintance here is Tina Charles, who played in WCBA for several seasons."

Charles, 30, who was selected by the Connecticut Sun as the first overall in the 2010 WNBA Draft, set the mark as the fastest player in WNBA history to reach 900, 1,000 and 1,100 rebounds. She also won two Olympic gold medals with Team USA. From 2015 to 2018, she played in WCBA for Xinjiang and Sichuan.

Now, Charles is with the New York Liberty.