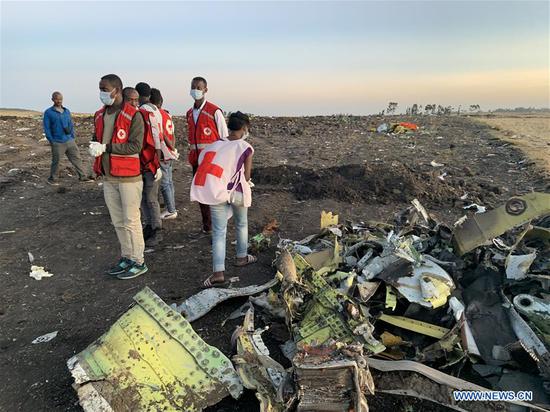 Rescuers work beside the wreckage of an Ethiopian Airlines' aircraft at the crash site, some 50 km east of Addis Ababa, capital of Ethiopia, on March 10, 2019. (Xinhua/Wang Shoubao)

An Ethiopian Airlines aircraft crashed shortly after taking off from the capital here on Sunday Morning local time, killing all 157 people on board. The shock plunged the world into grief.

Ethiopian Airlines "has decided to ground all B-737-8 MAX fleet effective yesterday March 10, 2019 until further notice," the airline tweeted Monday, adding that it didn't yet know the cause of the accident.

Ethiopian House of People's Representatives has declared a national day of mourning for victims of the tragic accident, the office of Ethiopian Prime Minister Abiy Ahmed tweeted Sunday.

Ahmed "assured that the cause of the accident will be investigated by technical experts and communicated promptly to the public as updates come in," according to the office's twitter post.

The United Nations (UN) and its agencies on Monday will fly flags at half-mast as 19 UN staff members were among those dead in the crash, said the UN migration agency.

UN Secretary-General Antonio Guterres "was deeply saddened at the tragic loss of lives in the airplane crash," said Stephane Dujarric, spokesman for the secretary-general, on Sunday. "He conveys his heartfelt sympathies and solidarity to the victims' families and loved ones ... as well as sincere condolences to the government and people of Ethiopia."

Obtained by the Ethiopian Airlines last November, the aircraft, a Boeing 737-800 MAX, has only been in service for four months, flying more than 1,200 hours until Sunday. En route to the Kenyan capital Nairobi, the flight crashed around Bishoftu town, some 45 km from the Ethiopian capital Addis Ababa.

Among the victims, 32 are from Kenya, 18 from Canada, nine from Ethiopia, eight each from China, Italy and the United States, seven each from Britain and France, six from Egypt, and the remaining from more than 20 other countries, said the airline.

Kenya has sent a team to Ethiopia to deal with the aftermath of the crash. Its government was focusing more on the welfare of the victims' relatives and friends who are now within the vicinity of the airport, said James Macharia, cabinet secretary for transport and infrastructure, on Sunday.

"I am deeply saddened by the terrible plane crash," said Canadian Prime Minister Justin Trudeau in a statement on Sunday. He offered condolences to "those who have lost family, friends, and loved ones as a result of this tragedy."

"We extend our profound condolences to the victims and deep sympathy to the bereaved families," Lu said, adding that the ministry and the Chinese embassy in Ethiopia will keep a watch over the developments and go all out to help the families of the victims to deal with the aftermath.

The United States "extends our deepest condolences to the families and friends of those killed in the tragic crash," said the Department of State on Sunday in a statement. "Our teams in Addis Ababa, Nairobi, and Washington, DC are working tirelessly to provide all appropriate consular assistance to families of the victims at this difficult time."

Boeing said Sunday that it has delayed the roll-out of its new 777X aircraft, which had been scheduled for March 13. The widebody aircraft, according to Boeing's official website, "will be the largest and most efficient twin-engine jet in the world."