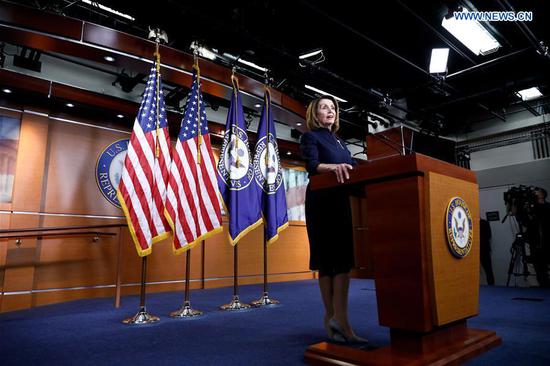 U.S. House Speaker Nancy Pelosi speaks during a press conference on Capitol Hill in Washington D.C., the United States, on Feb. 14, 2019. Nancy Pelosi, the top Democrat in the House, said her party is "reviewing our options" in responding to the anticipated emergency declaration. (Xinhua/Ting Shen)

U.S. President Donald Trump is prepared to sign a bipartisan bill on spending and border security to avert another government shutdown, but also declare a national emergency to obtain funds for his long-promised border wall, the White House said Thursday.

"President Trump will sign the government funding bill, and as he has stated before, he will also take other executive action - including a national emergency - to ensure we stop the national security and humanitarian crisis at the border," White House Press Secretary Sarah Sanders said in a statement.

"The President is once again delivering on his promise to build the wall, protect the border, and secure our great country," she said.

Minutes earlier, Senate Majority Leader Mitch McConnell broke the news of Trump's plan. He made the announcement on the Senate floor and said the Senate will soon vote on the bill that's needed to avoid a partial federal shutdown Friday.

Shortly after the announcement, the Senate voted 82-16 to pass the spending and border security bill, which was expected to be voted on Thursday night by the House of Representatives.

The bill, once approved by the Congress and Trump, will keep the government open past a midnight Friday deadline. It would include 1.375 billion U.S. dollars for physical barriers along the U.S.-Mexico border.

Trump had previously demanded 5.7 billion dollars in funding for the border wall, his signature campaign promise. The fight over the funding of the border wall between the White House and congressional Democrats led to the record-breaking 35-day federal government shutdown which ended late January.

A national emergency declaration, which would allow the president to bypass Congress and use the military to build the wall, is widely expected to spark lawsuits challenging the president's authority.

In opting to declare a national emergency, Trump would seek to access funds for the wall that Congress had not explicitly authorized for the purpose, said a New York Times report, calling it a provocative move that would test the bounds of U.S. presidential authority in a time of divided government.

Speaker Nancy Pelosi, the top Democrat in the House, said her party is "reviewing our options" in responding to the anticipated emergency declaration.

"The president is doing an end run around Congress," she said.

"You want to talk about a national emergency, let's talk about today," Pelosi said, referring to the first anniversary of the school shooting in Parkland, Florida.

Just before Wednesday midnight, House and Senate negotiators unveiled the 1,159-page bill allowing the federal government to open through the end of September, leaving little time for lawmakers to actually digest its contents.