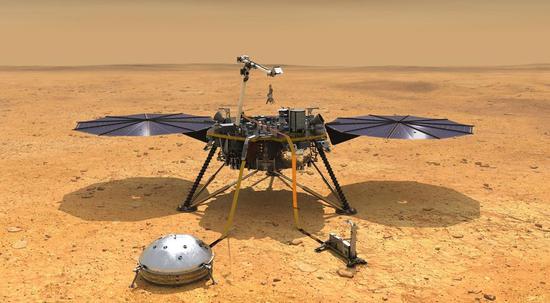 An illustration of NASA's InSight spacecraft after the deployment of its major instruments, a process that won't be completed until a few months after landing. Credit: NASA/JPL-Caltech

NASA's InSight lander is to place the heat flow probe on the Martian surface to take the temperature of the inside, according to the mission team.

The lander has got a grip on the instrument, and is ready to pick it up and place it on the Red Planet, tweeted the InSight mission on Monday.

"Once set, it will take Mars' temperature and tell us how much heat is flowing from inside," it tweeted.

InSight landed safely on Mars on Nov. 26, kicking off a two-year mission to explore the deep interior of the Red Planet.

The heat flow probe is the final instrument to be deployed on Mars. Previously InSight set up the seismometer on Mars to record the Marsquakes, and help scientists to understand how Mars and other rocky planets are formed.

Meanwhile, the Rotation and Interior Structure Experiment (RISE), which does not have its own separate instrument, had already begun using InSight's radio connection with Earth to collect preliminary data on the planet's core, according to the team.

Launched on May 5, InSight marks NASA's first landing on Mars since the Curiosity rover in 2012 and the first dedicated to studying the deep interior of the red planet.