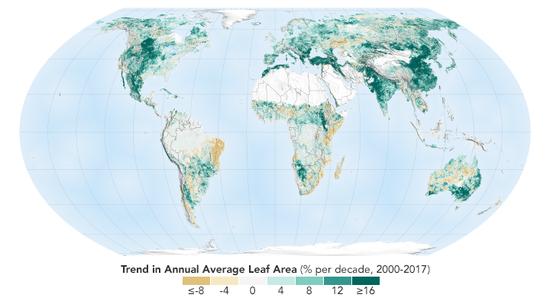 Data from NASA satellites have shown that China and India led the way in greening on land, thanks to ambitious tree-planting programs in China and intensive agriculture in both countries.

The study published in the latest edition in Nature Sustainability on Monday showed that at least 25 percent of the foliage expansion since the early 2000s globally came in China.

The researchers from Boston University found that global green leaf area has increased by 5 percent in the new century, an area equivalent to all of the Amazon rainforest.

"China and India account for one-third of the greening, but contain only nine percent of the planet's land area covered in vegetation," said lead author Chen Chi of Boston University.

"That is a surprising finding, considering the general notion of land degradation in populous countries from over-exploitation," said Chen.

Rama Nemani, a research scientist at NASA's Ames Research Center and a co-author of the study said: "When the greening of the Earth was first observed, we thought it was due to a warmer, wetter climate and fertilization from the added carbon dioxide in the atmosphere."

But with data from NASA's Terra and Aqua satellites, scientists realized that humans are also contributing.

"Humans are incredibly resilient. That's what we see in the satellite data," said Nemani.

China's contribution to the global greening trend comes in large part from its programs to conserve and expand forests, accounting for about 42 percent of the greening contribution, according to the study.

Another 32 percent of the greening change in China, and 82 percent in India, resulted from intensive cultivation of food crops, since the farmland in China and India has not changed much since the early 2000s, while both increased their food production to feed large populations.

However, the researchers rang bells as well. They said that the gain in global greenness did not necessarily offset the loss of natural vegetation in tropical regions like Brazil and Indonesia.

The loss of sustainability and biodiversity in those ecosystems cannot be offset by the simple greenness of the landscape, according to the study.