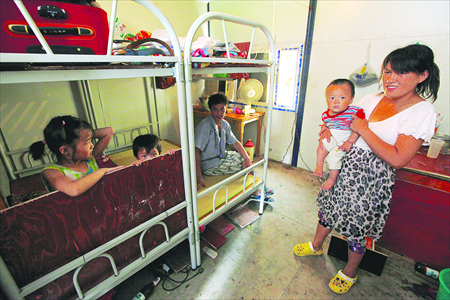 A family of five from Fuyang, Anhui Province, rest from the sweltering noon in a dorm. Due to being the violation of the family planning policy, the parents refused to give their names. (Photo: Lu Yun/GT)

China will not immediately remove its family planning policy, as laws on population and family planning are made in accordance with the Constitution, according to the national health authority.

"So it is not appropriate to delete content related to 'family planning' right now," said the NHC.

China's population has undergone huge changes since the new millennium, and family planning also shifted its focus to regulating the size of the population while raising the quality of the population. Thus, the NHC will work with relevant departments to propose a solution to the population problem and promote a balanced population development, said the commission.

In late January, the National Bureau of Statistics said that the number of newborns in China had dropped to 15.23 million in 2018, marking the lowest level since 1961.

The level was two million less than in 2017. In 2016, the year China started allowing all couples to have two children, China had 18.5 million newborns.