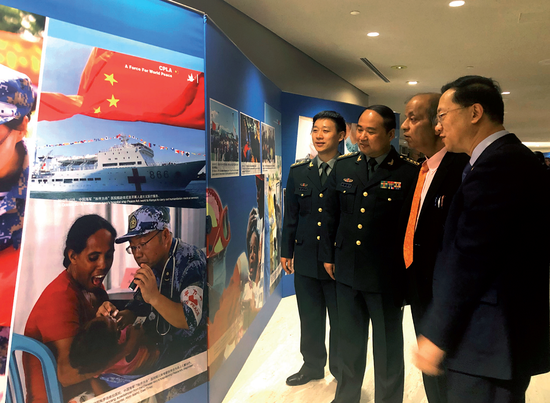 China was recognized as an essential partner across the spectrum of United Nations peacekeeping and has been taking on significant responsibilities, a senior UN official said on Monday.

"China is in a unique position of not only being the largest contributor amongst permanent members of the Security Council, but also being one of the 10 top contributors of uniformed personnel," said Khare.

China has dispatched more than 39,000 peacekeeping military personnel, said Ma Zhaoxu, China's permanent representative to the UN, during the opening ceremony of the exhibition CPLA: A Force For World Peace.

The Chinese People's Liberation Army (PLA) has participated in 24 peacekeeping missions in the past three decades.

Also contributed by Chinese peacekeepers are significant amounts of infrastructure and supporting systems, including 13,000 kilometers (8,078 miles) of roads in the peacekeeping operation area, medical treatments for more than 170,000 patients, and more than 300 armed escorts and patrols.

The Chinese Navy has regularly deployed three to four vessels in the Gulf of Aden to carry out escort missions since late 2008, rising to 31 groups of 100 vessels as of December 2018, providing protection for more than 6,600 Chinese and foreign vessels.

"We are absolutely delighted that China has been willing to not only provide troops to the peacekeeping operations but to provide troops that are so well-trained and equipped," said Hugh Van Roosen, deputy military adviser at the UN Department of Peacekeeping Operations, who previously served in the US Army.

"These individuals that I have the opportunity to work with have been highly educated, highly motivated and highly capable," said Van Roosen.

"They are truly individuals that can be relied upon for us" to deliver the best work and keep the peacekeeping operations smooth, he added.

China has contributed more than $5.8 million to UN peacekeeping through the peace and security trust fund since 2017, he said, a significant part of which is allocated to projects that improve the security of UN peacekeepers.

One of the UN's concerns is that the peacekeepers are directly targeted by terrorist groups in some areas, said Carlos Humberto Loitey, military adviser from the UN Department of Peacekeeping Operations.

The joint efforts of China and other countries are enhancing the UN's protection of bases.

In 2016, China and the UN signed an agreement to contribute $200 million to the UN in the following decade, with a specific target for the UN Peace and Development Trust Fund established in the same year.

China's contribution to the fund has been critical for the development and improvement of the performance of UN peacekeeping and the reduction of peacekeeping fatalities, Khare said.

Details of the PLA's practices and achievements were presented through pictures and showcased in the exhibition (Feb 11-22) co-hosted by the Political Work Department of China's Central Military Commission and Chinese Permanent Mission to the UN.

The exhibition showcased the PLA as it participates in UN peacekeeping missions, provides international disaster relief and humanitarian assistance, and promotes security exchange and cooperation.

"I believe that through these demonstrations, people will get a better understanding of China's firm commitments to world peace and the role the Chinese military plays in this regard," said Ma in his opening remarks.

"It's a very extraordinary contribution. All of us know that China is the first country" with major contributions of troops and financing, said Dimitrios Efstathio, counselor of the permanent mission of Greece to the UN.

China has also made important contributions training troops from other countries, Loitey said.

“The improvements and strengthening of our peacekeeping operations would not be possible without the support from member states like China,” said Khare.